VMWare Fusion as of Version 12.x on MacOS Big Sur is just a gigantic waste of money. My company spends a few thousand EUR each year (whenever a new release comes up) to keep all Mac clients up to date. Yet there is ZERO official support available. That said, I still wanted to test the creation of a Big Sur VM, and to do so I started with VMWare Fusion 12. I basically followed the exact same workflow as my earlier post on VM’s and Automated Enrolment, which all seems to work fine.

VMware Fusion® 12.1.0 is the easiest, fastest, and most reliable way to run Windows and other x86 based operating systems on a Mac without rebooting.

​ When VMware Fusion is running on macOS 10.15, the kernel extension issue can be easily fixed by a button click. 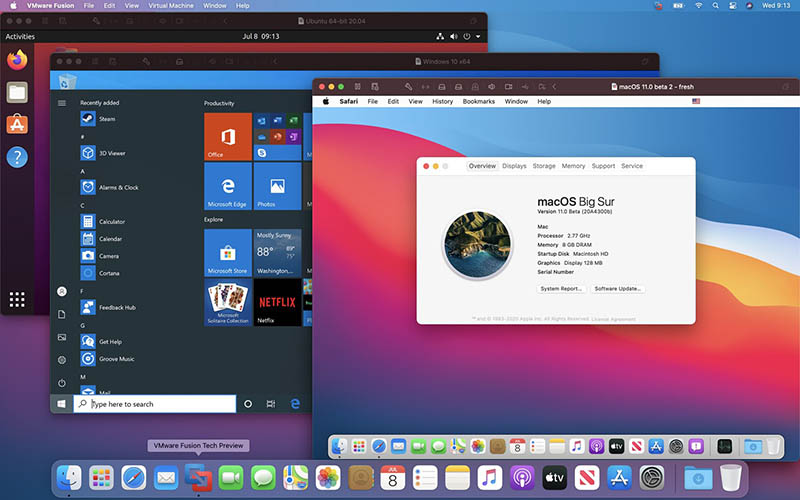 Ok.. I’m so ecstatic.. a quick blog post must be written…

The Product manager of VMware Fusion, Michael Roy, had a classic “One More Thing” item in his VMworld presentation. The presentation was “What’s New with VMware Workstation and VMware Fusion”.

While running a Big Sur macOS guest, he showed “Metal Support” working without a hitch… Now we have been told for years that we cannot get 3D Acceleration in a macOS guest. Seeing this on the list of “things to come” was already pretty great. Something to look forward to.
During that same presentation he also showed the .vmx settings in order to get that working. Once the feature lands…

Who wants to wait?

So of course, immediately after the presentation I had to try. No matter that it is only supposed to be working in a future version of VMware Fusion 12.0.
After adding the .vmx settings from the presentation I got a “Invalid configuration” error (or something along those lines).
OK, sad panda.
But … silly me did not look at the vmware.log file. Today I was poking Michael a bit on twitter and asking about how well Metal works on Big Sur beta 9 and that it is “so hard to wait” and he tells me “but you can try it yourself already”… 😮

OMG.. that’s when I realized that I had missed a detail..

It’s all in the details

This is the best thing since sliced bread.

This is not an officially released feature, treat it what it is: Experimental
Required: minimum of macOS Big Sur as host OS
Required: minimum VMware Fusion 12.0
Guest OS support: minimum of macOS Big Sur as guest OS (earlier macOS versions are missing the GPU paravirtual kernel extension for this – AppleParavirtGPU.kext. Unless apple steps in here and releases that for earlier macOS versions, it likely isn’t coming to earlier guest OS’s)
You have to add the following lines to the .vmx file of your VM in order to test this:
svga.present='FALSE'
appleGPU0.present='TRUE'
appleGPU0.screen0.width = '1680'
appleGPU0.screen0.height = '1050'

To be honest I don’t even have the lines with width and height, but that’s how you can define that for now.
It will only get better from here on once it is officially supported.

Now that you are here. Please check out our product “Vimalin“. It has been designed for making your life easier to get good backups of your VMs. We support VM’s running in VMware Fusion, VMware Workstation and VMware Player.

More info at our main page