SpeedFan monitor temperatures from several sources. By properly configuring SpeedFan, you canlet it change fan speeds based on system temperatures. When choosing parameters for the minimumand maximum fan speed, try to set them by hand (disable all the VARIATE FANs checkboxes) andlisten to the noise. When you hear no noise from the fan then you can set that value as theminimum fan speed for that fan. I suggest to use 100 as the maximum value, unless you hear alot of noise from it, in which case you might reduce the maximum speed to 95 or 90. You canset, say, 60 as the maximum value and, sometimes, I myself set it that way. Consider that whenthe WARNING temperature is reached, the program sets the fan speed to 100, whatever maximumspeed you selected. One last word should be said regarding the USE FAN x listbox. In my pc,more than one temperature changes when a fan runs faster. You can configure on which fan everytemperature should rely. On my system, TEMP1 and TEMP3 are both influenced by FAN1.
(Redirected from Thermal sensors)

The primary means of accessing the thermal sensors is through the thinkpad-acpi module, up to 16 sensors are supported. When the module is loaded, the sensors (some of which may be inactive) are shown through the standard sysfs hwmon interface used by the lm-sensors utilities, and also in /proc/acpi/ibm/thermal (which is deprecated and has been removed from the latest versions of the module).

lm-sensors/libsensors uses the hwmon interface exposed through /sys/bus/platform/devices/thinkpad_hwmon/ to read the temperatures, note that the sysfs interface returns normal open errors instead of weird values for sensors that are not active (which the simplistic sensors command ignore). lm-sensors/libsensors can be configured to give proper names to each sensor, which will be used by any properly written sensor applet.

To have 'sensors' use describing labels like above, you can add the following section to /etc/sensors3.conf, if not already there. This is an example for the T43. Similar technique apply for the other models. Use the sensor location findings below. 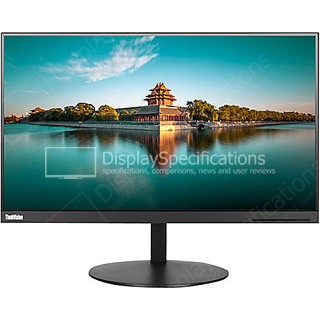 The old method to access the thermal readings is through the /proc interface:

If the ThinkPad supports the extended sensor set, eight more values will be displayed:

The Active Protection System firmware also reports a temperature, which is identical to one of the ACPI sensors. The corresponding sensor is actually not inside the HDAPS chip, and sometimes not even close to it.

The system hard disk temperature can be read through the disk's SMART interface:

Or, for SATA-equipped models running a recent Linux kernel (see Problems with SATA and Linux):

Reading this sensor will typically cause a drive spin-up and head unload.

Recent Hitachi disks provide a non-standard SENSE CONDITION command which reads the disk temperature without causing a spin-up or head load. The reported value is the same as when using SMART. This can be invoked, e.g., using # hdparm -H, or the relevant code in tp-fancontrol (download). When using the libata driver, this requires kernel >= 2.6.19-rc1.

This information is model specific.

On this A31 systemboard (FRU 26P8398), there is a Maxim MAX1668 5-channel remote/local temperature sensor (4 remote + 1 self temperature) on top of the systemboard, and a National Semiconductor LM75 single-channel 'digital temperature sensor and thermal watchdog' chip. It would appear that the LM75 has the ability to hard shutdown the processor (without software intervention) if its temperature exceeds a given threshold. I'm not sure if it is wired for this, nor whether the Thinkpad changes the threshold temperature from the chip's power-up default of 80Â°C. A software application with drivers on the LM75 webpage is available that claims to allow direct access to the thermal sensor chip (this hasn't been tried, but could be useful in other models to determine if this sensor is somewhere on the MB, and which register it corresponds to). The MAX1668's self-temperature reading does not appear anywhere in the above temperature registers; it's not clear whether it is read at all, and whether it is to be found elsewhere in the EC memory. These two chips (LM75 and MAX1668) account for some of the sensors.

The thinkpad-acpi documentation includes the report by Thomas Gruber:

The location of one of the sensors is identified here.

Found by Shmidoax using cooling spray to cool down components and observe the effect on the sensors.

Found by Marco Kraus for use in IBMDok.

Experimenting with a hair dryer, fgl_glxgears, grep and tools like that I (Dummyaccount) came to the following conclusions for the sensor-index mapping. More comments are provided at [1].

None of the these matches ACPI THM1, which (judging by the dramatic response to CPU load) is probably the CPU's on-die thermal sensor.

According to [2], the sensors in the T500 'may be identical to those reported for the T61', with the possibility that #11 may be the CPU heatsink. 'It is very closely correlated to cpu load but shows a lot more inertia than sensor 1 which changes almost instantaneously with cpu load.'

I (User:Nandhp) experimented with running glxgears, this produces a spike in #9, which does not occur under regular CPU load. #5 and #7 both belong to the main battery, for they disappear when it is removed. [3] suggests #6 and #8 should be for the UltraBay battery. It also implies that #4 should be for the GPU, however, my model (which has an integrated GPU) does not have a #4 sensor. --Nandhp 19:27, 17 June 2009 (UTC)

I (User:jal2) had a look into the schematics of the T500/W500 mainboard. There are thermal sensors at the CPU (internal diode), WWAN (Q21), under dem SO-DIMM slots (Q31), graphics chip (discrete only, internal diode), at the WLAN slot (Q104) and at the bottom side below the ICH (Q93). All Qxx are small, three pin transistors marked in the silk screen. These sensors are connected to a MAX6693 (U4), which also measures its own temperature. U4 in turn is connected via SMB to the EC. No idea about the mapping of the sensors to the indices in thermal, maybe someone wants to determine it using cooling spray?

There is a chip very close to the CPU, which monitors the processor and its own temperature, reports as temperatures 1 and 2 respectively. In X22, this sensor is ADM1023ARQ. In X24, the chip is NE1618. I think the sensor for temperature 3 is on the underside. Temperature 3 is high while charging battery.

I figured these out by myself (BDKMPSS), as there are just a few available, this wasn't a huge problem. I verified my presumptions with a contactless thermometer.

0x7A 'GPU?' is pretty hot and seems like the GPU, but as the Chipset and the GPU are cooled with the same heatsink it is difficult to separate them without roasting the machine. However the left and GPU side of the heatsink is much closer to the shown value than the right Chipset side.

These sensors were found on my X60:

I have started to figure out which sensors are which.

That is what I think is right for the ThinkPad X120e notebook. Since it has an integrated graphics card, CPU and GPU temerpatures are always equal. I am guessing that temp7 shows the battery temperature as it follows the values in /sys/devices/platform/smapi/BAT0/temperature from tp_smapi 0.41 (without the comma: a value of 26700 representing 26.7 in tp_smapi shows 26.0 in temp7 at the same time), however removing the battery leaves it at the last reported value. Values for temp2, temp4, temp5, temp6 and temp8 always stay at 0. Put the following in /etc/sensors.d/ThinkPadX120e:

That's what I found out so far. Hope the guys in the german tp-forum have some more details. thread

I am seeing more sensors on a X220 Tablet: