Well, let's get straight to it, shall we? The SSPX, the Society of St. Pius X — a group of clerics and bishops who do not exercise any legitimate ministry in the Catholic Church owing to their refusal to submit to the authority and jurisdiction of the Roman Pontiff, owing to their doctrinal issues regarding Vatican II — have recently posted a video which says all you need to hear.

By the way, that assessment of the SSPX is that of Pope Benedict, merely repeated by ChurchMilitant.com.

First, here are the words of the video, full screen so you can see them for yourselves.

'This is the reason Catholics are not obliged to attend the New Mass to fulfill their Sunday precept.'

'The New Mass is to be completely avoided as they understand it is an offense against God.'

Earlier the priest says the New Mass is a danger to souls.

Now stop for a moment and consider what this priest is saying: The New Mass, meaning the Mass of Pope Paul VI, the Novus Ordo, is an offense against God. A Mass approved by and offered by the popes of Our Blessed Lord’s Holy Catholic Church and nearly every single bishop is an offense against God. Further, you are instructed not to go to Mass on Sunday if you must go to a Novus Ordo, New Mass.

This is a classic case of throwing out the baby with the bathwater. Sure, there are abuses that occur in the New Mass owing to all kinds of issues that we point out here on the Vortex all the time.

But those abuses are just that — abuses. And they are to be placed at the feet of errant bishops, lazy unfaithful priests, dissident theologians and so forth. But to tell Catholics to stay home and not attend Mass on Sunday and refuse to fulfill their Sunday obligation to assist at the sacrifice of the Mass is beyond imagining. To call the Mass an 'offense against God'? Are you serious? To encourage people to commit mortal sin by refusing to fulfill their Sunday obligation?

But it's good that this video is out there because now the mask can finally be taken off this renegade outfit.

Let us share with you what Pope Benedict says of them: 'In order to make this clear once again: Until the doctrinal questions are clarified, the Society has no canonical status in the Church, and its ministers do not legitimately exercise any ministry in the Church.'

Those are the words of Peter himself, the Supreme Pontiff. He continued, 'This will make it clear that the problems now to be addressed [by the SSPX] are essentially doctrinal in nature and concern primarily the acceptance of the Second Vatican Council.'

The SSPX has played this game for decades now that their major issue has been the Traditional Mass versus the Novus Ordo, the New Mass. And while they certainly do have issues with the New Mass, their real problems — as the Pope himself says — are that they reject the Second Vatican Council — not have some questions about it, not want to sit down for discussions and more clarity, but doctrinal issues — doctrinal issues which place them outside the Church, not in full communion, as His Holiness phrased it — which is shorthand for schism.

The cheerleaders for the SSPX would have you believe that various prelates support them without an issue or doubt. Really?

Do they really expect that these prelates would support the notion that you must stay at home on Sunday and refuse to go to Mass and just say a private Rosary because the Mass you would be attending is the New Mass? Really?

Would these prelates that they pretend are all in on the SSPX — would they really say that the New Mass is an offense — an offense — against God?

Yet this is exactly, precisely, without any ambiguity, no clarification needed, what the official mouthpiece of the SSPX says — right out loud for the whole world to hear: The New Mass is to be avoided; you are not obliged to attend it on Sundays; it is an offense against God.

Even in the face of the Pope himself, they say they pray for him and put his picture up in their buildings, and they obey him — until they don't. They decry the Mass. They encourage people to mortal sin. They defy the Pope. They refuse the obedience due him.

If that doesn't constitute a schism, pray tell, what does?

Even Bp. Robert Morlino of Madison, Wisconsin had to issue a statement last week saying that this group — the SSPX — was to be avoided: 'Have nothing to do with them.'

The priests of the SSPX, because for the most part they were ordained illicitly (i.e., by a bishop who had no jurisdiction over them and no permission to ordain), they are suspended ipso facto from the moment of their ordination. ... [T]hey have no permission from the Church, which is necessary, to exercise priestly ministry. Their Masses are valid but are illegitimately celebrated. Catholics should not frequent SSPX chapels or seek sacraments from the priests of the SSPX.

Pray for the leaders of the SSPX to abandon their disobedience and for the supporters to understand (as so many of them already have) that when you cut yourself off from Peter, you are lost, no matter how Catholic it may look.

You don't break away from the Church to fix it. That's what Martin Luther did — a man who was every bit convinced of the rightness of his position as the SSPX is today.

Think about it: 'The Mass is an offense against God.' 'It is to be completely avoided.' 'The Society has no canonical status in the Church.' 'Its ministers do not legitimately exercise any ministry in the Church.' 'The problems now to be addressed are essentially doctrinal.' 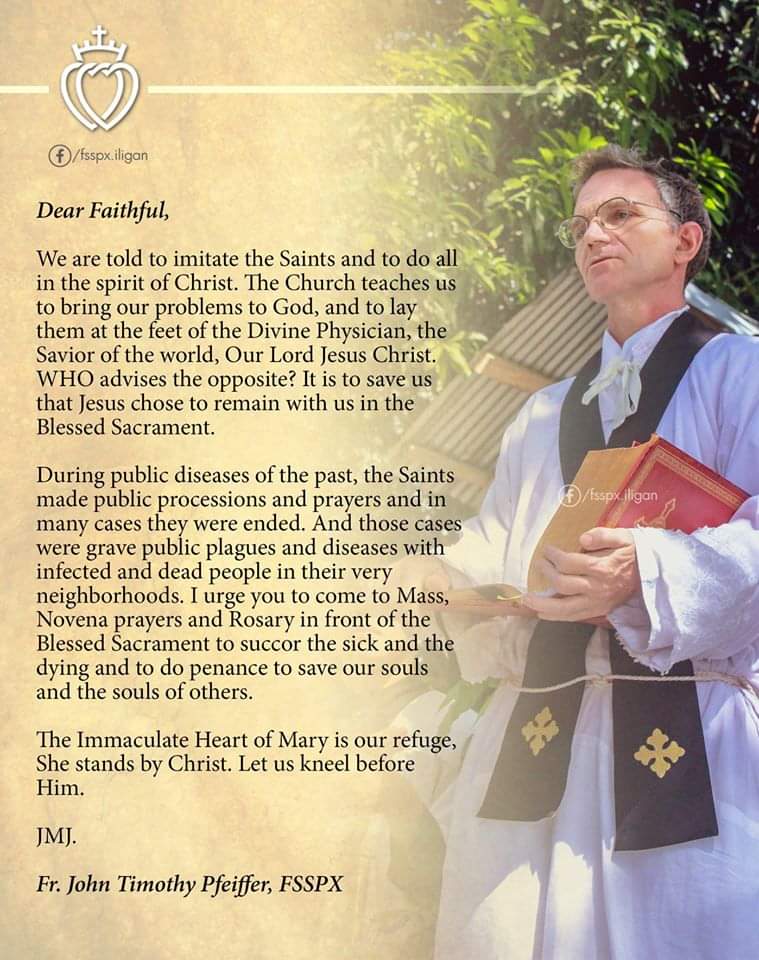 That is quite a mouthful.

Whom do you choose? The Pope — or an outfit with no canonical status whose ministers do not legitimately exercise any ministry?