The Society of St. Pius V (commonly known as the SSPV) also operating under the names Congregation of St. Pius V and Daughters of Mary, is a Traditionalist self-professed Catholic society of validly ordained priests based in Oyster Bay Cove, New York, founded in 1983 by nine priests in the United States expelled from the Society of St.

The Society of Saint Pius V (SSPV; Latin: Societas Sacerdotalis Sancti Pii Quinti), is a society of priests, formed in 1983 and based in Oyster Bay Cove, New York. The priests of SSPV broke away from the Society of St. Pius X over liturgical issues, and hold that many in the hierarchy of the Roman Catholic Church no longer adhere to the Catholic faith but instead profess a new, modernist, Conciliar religion. SSPV priests regard the questions of the legitimacy of the present hierarchy and the possibility that the Holy See is unoccupied (sedevacantism) to be unresolved. The SSPV is led by its founder, Bishop Clarence Kelly, and named after Pius V, who promulgated the Tridentine Mass.

The SSPV developed out of the Society of St. Pius X (SSPX), the traditionalist organization founded by Archbishop Marcel Lefebvre. In 1983, Lefebvre expelled four priests (Fr. Clarence Kelly, Fr. Daniel Dolan, Fr. Anthony Cekada, and Fr. Eugene Berry) of the SSPX's Northeast USA District from the society, partly because they were opposed to his instructions that Mass be celebrated according to the 1962 edition of the Roman Missal issued by John XXIII. Other issues occasioning the split were Lefebvre's order that Society priests must accept the decrees of nullity handed down by diocesan marriage tribunals and the acceptance of new members into the group who had been ordained to the priesthood according to the revised sacramental rites of Pope Paul VI.

'The Nine' (the four expelled priests plus five who voluntarily left the SSPX) balked at Lefebvre's imposition of the 1962 missal which they believed included departures from the liturgical traditions of the Church (for example, adding the name of St. Joseph to the Canon of the Mass).[1] A more basic reason was the belief amongst the Nine that the men who had reigned as pope since the death of Pope Pius XII (d. 1958) had not been legitimate popes (Canon 1325, no. 2, 1917),[2] although Fr. Cekada later stated that '...[t]he 'pope question' was not raised at the time, and was not at issue.'[3] They held that these Popes had officially taught and/or accepted heretical doctrines and therefore had lost or never occupied the See of Rome (Canon 188, no. 4, 1917).[4] Like the Society of St. Pius X, they believed that there had been novel interpretations of the traditional teachings of the Church on issues such as religious liberty. One of the Nine, Fr. Dolan, admitted that while a member of the SSPX, he had concluded that the See of Peter was vacant.[5]

In keeping with their traditionalist position, in chapels operated by the society, women were required to wear head coverings; 'slacks, short skirts, sleeveless or revealing clothing are forbidden.'[6]

Within a few years, about half of the original nine SSPV priests separated from Fr. Kelly. Most of them formed an openly sedevacantist group, 'Catholic Restoration', under the leadership of Frs. Dolan and Sanborn. Both were later consecrated as bishops in the episcopal lineage of the Vietnamese Archbishop Ngo Dinh Thuc Pierre Martin. The other priests founded independent ministries.

Fr. Cekada states[7] that this resulted from the SSPV's intrinsic distrust of a centralized authority as existed in the SSPX, which makes the latter vulnerable to being 'subverted with one stroke of a pen' to the Vatican. Rather than independent congregations being a weakness and something to be lamented, Cekada considers all such groups and priests taken together preferable to the SSPX, which has continued to hold negotiations with Rome and uses the 1962 Missal.

On 19 October 1993, 86-year-old Bishop Alfredo Méndez-Gonzalez, who had served as Bishop of Arecibo, Puerto Rico, until his retirement in 1974, consecrated Fr. Kelly as a bishop at a ceremony in Carlsbad, California. Bishop Méndez had already publicly ordained two seminarians of the SSPV to the priesthood in 1990. Kelly's consecration was announced a few days after Bishop Méndez's death in 1995. The Roman Catholic Church considers Kelly's consecration illicit, i.e. not in conformity with canon law.[8]

The SSPV currently has five permanent priories, and its priests serve a network of chapels, churches, and temporary worship locations in 14 states of the U.S. (as of 2020).[10] It operates only in North America. The SSPV is not considered to have canonical status within the Catholic Church.[8] SSPV opened Immaculate Heart Seminary, located on sixty-one acres of property in the Catskill Mountains of New York, in the fall of 1996. The Founder and Spiritual Father of the Congregation of St. Pius V is the Most Reverend Clarence Kelly. The first priest member of the Congregation, Father Joseph Santay, was ordained in 2001, and consecrated a Bishop in 2007.[11]

The Daughters of Mary, Mother of Our Savior[1] are a congregation of Sisters founded by then-Fr. Kelly in 1984. Their congregation's motherhouse and novitiate are located in Round Top, New York, in the Catskill Mountains area. The Sisters have two additional houses in the United States (Melville, NY, and White Bear Lake, MN) where they run schools, and they are also involved in other types of charity work, such as visiting nursing homes. The current Mother General is Mother Mary Bosco.

The Congregation of St. Pius V (CSPV) is a Society of Common Life for priests and coadjutor brothers, founded by Bishop Kelly. CSPV was formed to provide a canonical structure for the incardination of priests and the affiliation of religious. The Congregation operates Immaculate Heart Seminary in Round Top, New York, for its candidates, under the direction of Bishop Joseph Santay, CSPV. The seminary's graduates are ordained by Bishops Kelly and/or Santay. As of 2018, the CSPV had 12 priest members including Bp. Santay and three Brothers.[12] 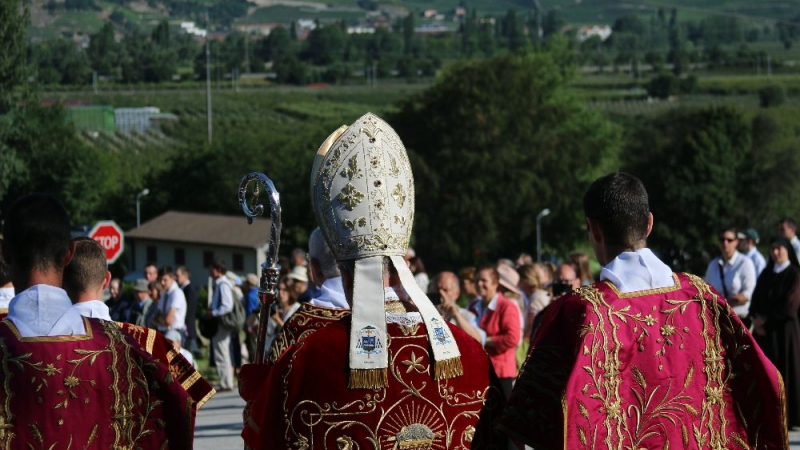 Society Of St Pius The Tenth