You are not signed in as a Premium user; we rely on Premium users to support our news reporting. Sign in or Sign up today!

MEDFORD, Ore. (ChurchMilitant.com) - The former head of the Vatican's highest court is saying the Society of St. Pius X (SSPX) is 'in schism.'

In newly released audio, Cdl. Raymond Burke, former head of the Apostolic Signatura, made the remarks at the Sacred Liturgy conference in Medford, Oregon in July. In answer to a question about attending liturgies offered by the priestly group, Burke said:

Burke is among the highest-ranking prelates in the Church to state that the SSPX is in schism. Cardinal Gerhard Mueller, former prefect of the Congregation for the Doctrine of the Faith, has also said the SSPX is in schism, in comments made in 2013 to the Italian press:

The canonical excommunication of the bishops for their illegal ordinations was revoked, but a de facto sacramental excommunication remains for their schism; they put themselves out of communion with the Church. After that we are not closing the door and never will, but we are inviting them to be reconciled. But they too must change their attitude, accept the conditions of the Catholic Church, and the Supreme Pontiff as the definitive criterion for membership.

The 69-year-old cardinal acknowledged the confusion that has ensued since Pope Francis granted an indult to the SSPX to hear confessions and, more recently, to officiate at weddings (on condition that no diocesan priests are available and the local bishop approves). Both overtures were made for the benefit of the faithful, and formally changed nothing regarding the official status of the SSPX, whose priests remain suspended a divinis and are therefore forbidden to offer the other sacraments.

'[T]here is no canonical explanation for it, and it is simply an anomaly,' Burke remarked on the recent indults. 'They're no longer excommunicated, but they're also not in regular communion with the Catholic Church.' 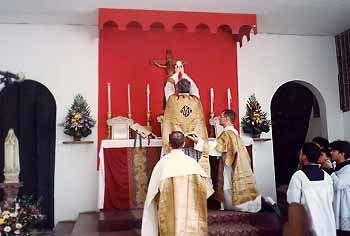 In Pope Benedict's 2009 letter addressing the remission of the excommunications of the four founding bishops of the SSPX, he confirmed that 'until the doctrinal questions are clarified, the Society has no canonical status in the Church, and its ministers — even though they have been freed of the ecclesiastical penalty — do not legitimately exercise any ministry in the Church.'

In light of this status, which has not formally changed, Burke warned the faithful it was best to avoid SSPX liturgies.

I don't think it's a good sign to receive sacraments in the Priestly Society of St. Pius X because that's not helping them to, first of all, the sacraments are not celebrated licitly. They're valid; there's no question about it if the priests are validly ordained, but ... it's a countersign to the communion of the Church. Instead we should be encouraging the members of the Priestly Society of St. Pius X to be reconciled with the Church.

Although the Holy See has been in talks on and off with the SSPX since the illicit 1988 consecrations, no agreement has ever been reached between the two parties. Questions of doctrine in the documents of Vatican II are often the sticking point preventing the priestly society from signing any agreement.

SSPX Superior General Bp. Bernard Fellay was among the signatories of the Filial Correction submitted to the pope September 23 asking him to clarify seven points of alleged heresy in Amoris Laetitia, the apostolic exhortation on marriage and the family that has led to worldwide confusion and varying interpretations.

The Society of St. Pius X is an international society made up of traditional Roman Catholic clergy. Founded with canonical approval in 1970[1] by the late ArchbishopMarcel Lefebvre, it is the largest Traditional Catholic organization in operation and currently administers the Sacraments in over 27 countries. There is much dispute regarding accusations of schism due to Archbishop Lefebvre's decision to consecrate 4 Bishops in 1988, disregarding the command of Pope John Paul II.

The Society of St. Pius X originated as a reaction to the reforms of the Second Vatican Council within the Catholic Church. In 1968, a group of French seminarians grew concerned with the orthodoxy of their priestly training due to the New Left ideology which had infiltrated their seminaries.[2] As a result, they sought out the recently retired Archbishop Marcel Lefebvre, with the request that he adopt the task of overseeing their priestly formation. Originally reluctant to get involved, Archbishop Lefebvre was persuaded to relent, and later said that it would have been an abandonment of Church Tradition if he had ignored them. Thus, International Priestly Society of St. Pius X was unofficially created.

In 1970, the Bishop of Lausanne, Geneva, and Fribourg, His Excellency Bishop Charriere, officially recognized the canonical validity of the new Society.[3] At the same time, a group of Swiss laymen offered their property in Econe to the Archbishop as a seminary for future priests.

The canonical status was confirmed on February 18, 1971 by the prefect for the Sacred Congregation for the Clergy, Cardinal,[4] who praised the society's statutes and recognised it as an international Catholic society with the power to incardinate its clergy. Thus, the Society became legally recognised as a legitimate Catholic society, unable to be suppressed without a genuine reason or following strict canonical procedures.

On June 10, 1971, Archbishop Lefebvre formally announces that he will not accept nor celebrate Pope Paul VI's Novus Ordo Mass, accusing it of being Protestant, based on the fact that six Protestant ministers collaborated in its creation,[5] and the fabrication of known Freemason Archbishop Annibal [6] Archbishop Lefebvre would continue to voice these sentiments in denouncing the Novus Ordo Mass throughout the remainder of his life, often accusing it of being a 'bastard rite'.[7] In response to Lefebvre's traditional Catholic stance, the French Episcopal Council denounced Econe as 'the wildcat seminary'.[8]

In November 1974, two apostolic visitors from Rome arrive at Econe. Whilst speaking to the seminarians and teaching staff, they scandalise the faithful by giving support to contraception and ordination of married men. In response to this, Archbishop Lefebvre pens his Declaration, condemning Rome as 'neo-Modernist' and 'neo-Protestant', and pledging his allegiance to the traditional Catholic faith, regardless of what innovations Rome may espouse.[9]

His health failing, and fearing that his death may mark the end of the traditional Sacraments, Archbishop Lefebvre declared on February 2, 1988 that he intended to consecrate three Bishops, in order to keep the Sacraments of Confirmation and Ordination available to all Catholics. On hearing this news, Rome took the step of renewing negations with the Society and an agreement is reached on the May 5th, allowing the Society to become an approved Society of Apostolic Life and agreeing that one Society priest would be consecrated a Bishop at a time stated by Pope John Paul II. However, the Archbishop realised that no time limit was placed on Rome's assurances and, fearing that the agreement was a ploy to distract him until his death, announced that he would proceed with the Episcopal Consecrations on June 30, 1988.

On June 29, Rome made a last attempt to persuade the Archbishop not to continue with his intentions. A driver is sent to Econe and a promise is made that, if he returns to Rome with the driver, the Pope will personally speak to him and attempt to find another solution. The Archbishop refused.[10]

On June 30, 1988, Archbishop Lefebre, alongside Brazilian Bishop Antonio de Castro Mayer, consecrated four Bishops in the traditional rite of Consecration. The four priests consecrated were: Father Bernard Fellay, Father Richard Williamson, Father Bernard Tissier de Mallerais, and Father Alfonso de Galarreta. Before consecrating the men, Archbishop Lefebvre made it clear that he was not breaking with Rome, nor was he renouncing the Papacy of John Paul II. But he insisted that the Catholic Faith was not being voiced by Rome and, as a Bishop, he had a duty to preserve the Faith, whatever the cost. .[11]

On the 2nd July 1988, Pope John Paul II issued his Apostolic Letter 'Ecclesia Dei' in which he condemned the consecrations as 'unlawful', an act of 'disobedience' and, therefore, a 'schismatic act'.[12] As a result, the Pope claimed that the Archbishop and four new Bishops had automatically incurred the penalty of excommunication. However, the Pope did not formally excommunicate the five men, nor was he speaking ex cathedra but only as a private theologian.