Serial Box is rebranding as Realm, and the audio-fiction company is now releasing original shows as free, ad-supported podcasts. Spotify, Google Podcast and Stitcher. Stuff You Should Know. By: HowStuffWorks. Updates: Tuesday, Thursday, and Saturday. 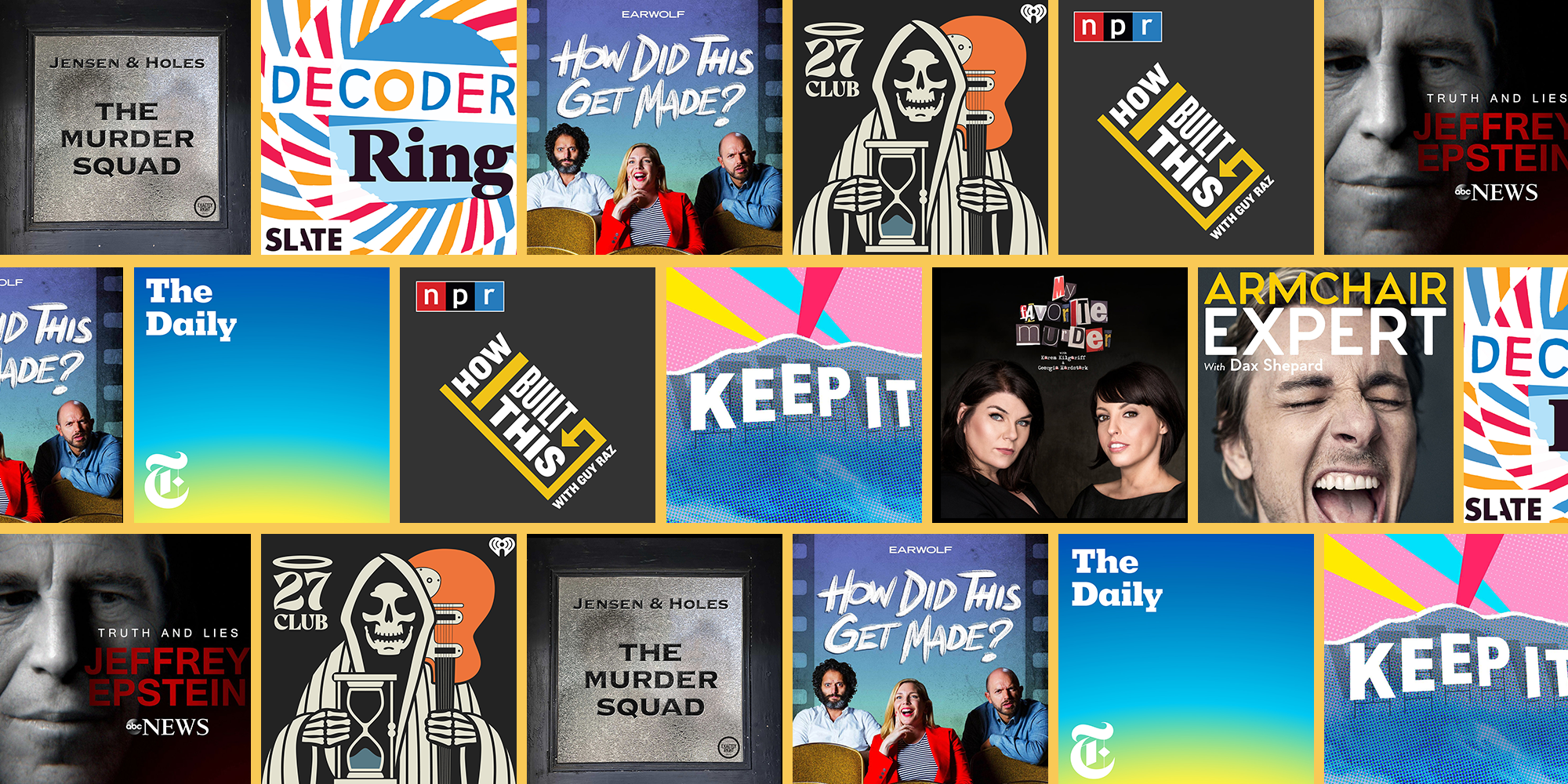 What's the magic ingredient of a really great podcast, the thing that makes people tune in time after time? It's simple in theory: Have a really good story. But how?

There are all sorts of ways. Take Serial, the investigative journalism podcast that launched with the true story of the unsolved murder of high school senior Hae Min Lee. It's been downloaded more than 350 million times as of 2018. Come September 20, it will debut its third season. Or, consider This American Life, where producers have been sharing good stories since 1995.

SEE ALSO: This is the most important thing you need to start your own podcast

However they do it, one thing is for sure: You won't want to stop listening. These 15 podcasts deliver on story-telling like no others.

Serial's first season earned its popularity with its strategically timed narrative, quality production, and a dogged attempt to get as close as possible to the 15-year-old murder of Hae Min Lee, for which her ex-boyfriend was convicted — don't worry, this isn't a spoiler: It's merely where the story begins before delving deeper into the case.

In Serial's second season, the podcast focuses on the true story of U.S. soldier Bowe Bergdah, who returns home from Afghanistan in 2014 after being held prisoner by the Taliban for five years. Bergdah's celebratory homecoming is cut short when the public suddenly denounces his hero status, calling him a deserter and traitor. Bergdah shares the events that lead up to the public's general disapproval of his actions in Afghanistan.

What makes Serial so captivating, whatever the season, is host Sarah Koenig's dedication to uncovering the truth behind each story, and delivering key findings, research, and conversations with the people involved.

The Longform podcast is made alongside Longform.org, which curates some of the best longform journalism, like Atlas Obscura's overview of Britain's secret nuclear bunkers and the New Yorker's speculation of whether or not Facebook has had a direct impact on democracy.

Each episode features an interview with journalists about their most hard-hitting stories, their methods, and their connection to their subjects. Well-known interviewees have included Gay Talese, Malcolm Gladwell, and Michael Lewis. Learning what happens in the making of a story gives listeners a better understanding and appreciation of journalism as a whole.

The Moth has been around for about as long as This American Life, though not necessarily in audio form. The New York City-based nonprofit started with live storytelling events and contests (StorySLAMs with themes like 'Saved,' 'Scars' and 'Gratitude'), and now has a podcast featuring these short stories.

What makes the podcast so great is its simple format: people sharing their stories. The tales are heartfelt, humorous, original, and sincere, and they're told by everyone, from comedians to professional storytellers, like Hari Kondabolu and Elna Baker. You'll hear of exotic dancing, heartbreaking high school rejections, and experiences with Australian wild life that will make you laugh, cry, and everything between.

Strangers comes from Peabody award-winner Lea Thau, former director of The Moth. The podcast's ethos is the notion that you can create a connection to someone despite their being a complete stranger just by hearing their story.

Thau explores heartbreak, the connections we make, and what happens when you realize you're not the person you thought you were. You'll hear about a person whose parents control their dating profile, what happened when a Somali refugee family moved to Vermont, and learn of the enduring career of a bank robber.

But what really makes this a great storytelling podcast is when Thau shares her own stories. In the three-part episode 'Love Hurts,' she delves into the difficulty she faces dating. Her vulnerability and openness is emblematic of the series' ability to evoke your deepest emotions.

History buffs keen to learn more about the Civil War should listen to Uncivil. The 2017 Peabody Award-winning podcast delves deep into lesser-known Civil War history. You'll hear stories about everything from political uprisings to corruption scandals, and wonder why, or how, these stories were left out of the textbooks.

The podcast connects abolitionists' stories to the world we live in today, making the past thrilling, and revelatory, for today's listeners.

Snap Judgment, like The Moth, is based off a live storytelling show. The difference is that Snap Judgment, which is produced by NPR and hosted by Glynn Washington, adds musical accompaniment to stories, usually making for an experience more along the lines of slam poetry. Public listening risks public tears, thanks to Snap Judgement's moving and affecting stories.

The aim of Backstory is to take the headlines of history, both banal and historic, and make them into stories. It's hosted by three American history scholars, so you'll get both accuracy and fun — thanks to the hosts' undeniable chemistry and interactions.

Sure, you could just read a history book or google events you're yearning to learn more about, but then you'd miss out on all the links being made to current events, not to mention the hosts' witticisms. Learn about the history of college sports, utopia, and extinction in America, among many other things.

The Truth offers short stories — frightening, funny and heartwarming — woven through with audio elements, like narration and sound effects, to make them come alive. Subjects include everything from co-ops to mall Santas. Then there's the episode 'Brain Chemistry,' in which a cryogenically frozen man returns to life and finds it is not what he expected.

If you like your stories creepy and soothing at the same time, you'll love Welcome to Night Vale. This podcast blew up with the help of a Tumblr fan base, and has been spinning tales of the weirdest supernatural fictional desert town in America ever since.

The podcast is formatted as if it were a traditional local radio news program, giving its community updates on things like mysterious hooded figures, a sentient glowing cloud, and an old women who lives just outside of town with a bunch of angels.

The Thrilling Adventure Hour is based on a live production staged in Los Angeles, and it has the nostalgic charm of old radio. Each episode features three unique stories, along with fictional sponsored ads and songs, lending the show an eclectic and whimsical vibe.

With a collection of well-known guest stars and an expanding universe of story arcs, you might want to start at the beginning — and listen to them all.

While many of these podcasts are trying to keep the radio form alive, We're Alive has been focusing on keeping it undead. It's a serial podcast that tells the story of one group of people surviving the zombie apocalypse in Los Angeles.

Tune in for vivid and dark descriptions of the apocalyptic landscape, the creatures that inhabit it, and the close bonds formed among the main characters. The characters reveal their hardships, fears, and hopes for survival in this emotional drama.

Leviathan is a science-fiction audio drama with high quality audio effects and an original soundtrack. The premise might seem too stuffed — a secret race of immortals in a city called Leviathan underneath the Pacific Ocean in the midst of war —but it gets a human face with Macallan Orsel, a genetic scientist in New York, who becomes embroiled in a war when she finds out she's descended from the people of Leviathan.

Ever wonder what it would be like to live on Mars? Well, so did the six people who signed up to reside in a concealed, imitation Mars habitat in Hawaii for a year. This podcast documents the true story of what occurred during this NASA-organized project.

The goal of the project was to help NASA gauge what they could expect upon visiting Mars, and the results of the project are fascinating. The Habitat recounts the experiences of the volunteers, and what life is like on Mars, well, fake Mars, anyway. You'll learn everything about the mission, from the freeze-dried food ingested to the meticulously monitored and curated 'Mars' landscape.

Dirt John tells the true story of interior designer Debra Newell, who meets and becomes entangled with John Meehan, a handsome doctor who seems to fulfill all of Newell's needs. But something's not quite right with Meehan. Eventually, he's revealed to be a con-artist, and he becomes the menacing center of the story — terrifying not only Newell, but also the people who surround her. L.A. Times' Christopher Goffard, who reported the story, also hosts the podcast.