On 29 July French filmmaker Chris Marker turned 88. As place of birth he likes to say the area around Ulan Bator, but actually it was more likely the area around Paris. For a long time his real name was unknown and he worked under various pseudonyms. To this day there are very few photos available of the publicity-shy artist — despite the fact that he himself is an avid photographer. In his films and photographs he has always prized the moment when a stranger suddenly and unexpectedly turns around and looks (back) into his camera …

Marker rose to fame with a short film – his experimental photo film “La Jetée” (1962). His extensive oeuvre includes films of all lengths, however. His second film, “Le Joli Mai” (1963), is almost three hours long. Marker has never let himself be pinned down in this respect. Nevertheless, all of his works are documentary, usually about social movements of some sort, but always about people (with the exception of the ones about cats, which, as a kind of higher creature, have a privileged position with him).

Although the objects and motifs in his films are anchored in external reality, Marker never worked toward the ideology of photographic authenticity, but instead has always reflected the mediatedness of imagery. Accordingly, fiction films and documentaries do not constitute opposing poles for him, or mutually exclusive methods for appropriating reality. He is therefore regarded as a co-founder of the essay film, which makes unconventional use of non-linear montage and fictional philosophical commentary.

This is why it should come as no surprise that Marker himself plays various roles in his films and that he took advantage of the possibilities offered by new technologies and media at a very early date. Since he evidently has a penchant for programming and hacking, he likes to use the most advanced and hippest low-tech applications instead of expensive high tech, i.e. production means that he himself masters and can control.

Marker thus already used a personal computer (his Apple II) to edit “Sans Soleil”. In 1996 he enlisted Hyperstudio and Xplugs to create the non-linear CD-ROM “Immemory” and then turned his attention in his film “Level 5″ (1997) to the computer image and video game. The extent to which Marker has been active in the Internet is difficult to determine due to the Web’s anonymity and the potential for fakes. In the mid-1990s there was a website that was attributed to him. At the moment, Chris Marker possibly has a photo album on Flickr: at least, if he has registered there as Sandor Krasna, the name of the fictional cameraman in “Sans Soleil”. URL: http://www.flickr.com/photos/[email protected]/

And if our guess is right that the pseudonym “Kosinki” has also been assumed by Chris Marker, then he has released his most recent films on YouTube (URL: http://www.youtube.com/user/Kosinki). Most of these, incidentally, are computer-generated shorts, among them clips created using shareware animation programmes or Web 2.0 applications like Animoto.

Ever since the Museum of Design in Zurich devoted an exhibition to him called “A Farewell to the Movies” (2008), Chris Marker has also appeared as an avatar on the 3D online platform Second Life. The Island of L’Ouvrier was created for him there for the Zurich show. Apart from a private home with a dock, beach and palm trees, a veritable Chris Marker Museum with exhibits of his works also floats above the island! 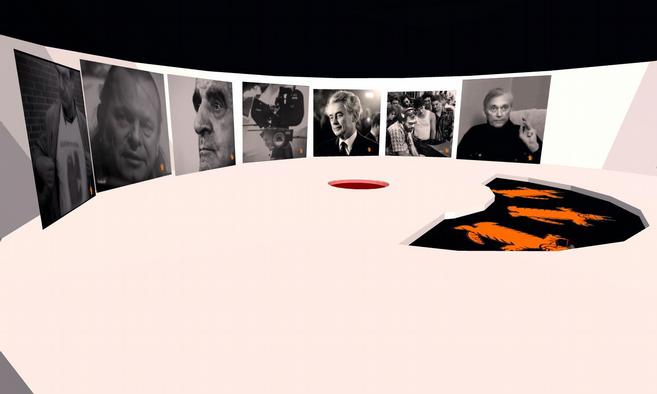 L’Ouvrier was not built by Marker himself, but by Austrian media artists Margarete Jahrmann and Max Moswitzer. Chris Marker has accepted this “˜new home’ though, and can occasionally be found in Second Life under the name Sergei Murasaki as an avatar on L’Ouvrier Island. He doesn’t seem to have quite assimilated yet because, even though he’s already been there for over a year, he’s still wearing the typical newbie attire: jeans, sandals and a t-shirt. A classier skin costs real Linden dollars on SL (unless you are able to programme it yourself). At least he seems to have – vaguely discernible – the comic character Guillaume the cat printed on his t-shirt.

The highlight of Marker’s virtual activities to date was a May 2009 “˜Avatour’ of his exhibition on L’Ouvrier, hosted by the Harvard Film Archive. In conversations during the tour, Marker was asked whether he had ever considered making a film in Second Life, a machinima. Sergei Murasaki answered: “I have already lots of rushes on my trips in SL – what I need is again an extra life to work on them.”

– <a”opens href=”http://www.webknot.net/2009/05/17/chris-marker-sergei-murasaki-presente-son-exposition-dans-louvroir/”></a”opens>Transcript of the chat with Chris Marker in Second Life in May 2009<//a>