CPU Temperature Monitor is an application that will help you to check the CPU temperature by collecting the data from various sensors. In a complex technological environment, hardware resources are important, and monitoring them can give you continuous uptime, maintain peak-performance, and minimize the business risks. Core Temp keeps it simple, only monitoring the temperature and load of your CPU. Not only does it display these stats in real time, and for each individual core, but the temp for each core is also.

A brand new computer will run super smooth, but over time, it’s normal if you start to experience a bit of sluggishness. This could be due to a variety of factors, such as hard drives degrading, or files that are cluttering up the system processes, or it could be an indication that your computer is overheating.

Overheating is one of the reasons for a computer slowing down, and if you’re looking to keep track of your computer’s performance, checking on the CPU’s temperature is one way to go about it. After all, the CPU is the heart and brain of the computer, so ensuring that it isn’t overheating is always a good idea.

Use Core Temp To Check Your CPU’s Temperature

Core Temp is a pretty useful and free app that you can use if you’d like to get a basic idea on how well your CPU is performing and the temperatures it is hitting. Do note that CPU temperature can fluctuate depending on what you’re doing, where obviously more intensive tasks will increase the heat generated versus when it is idle.

Now, you will see a lot of numbers when the app is installed. You should see the model of the CPU you are using and its platform and frequency. Below it, you will see various temperature readings. To get an understanding of the readings:

TJ. Max – Don’t be alarmed at this number. This is because this number is basically the highest temperature that the manufacturer of your CPU has rated it to run. This means that if you see your CPU hit temperatures that are close to the TJ. Max number, then you should be a little worried as it could be an indication of overheating. It has been suggested that under max load, your CPU temperatures should ideally be 15-20C below the TJ. Max value.

Core – Depending on how many cores your CPU has, this number will vary, but basically each core’s temperature will be shown. If you see differing temperatures among the cores, it is normal as long as the range isn’t too wide. Some potential reasons why some cores run hotter than others is because some cores are designated as the “primary” cores, which means that they are used more often.

It is also possible that during the installation process of your heatsink, you might have applied the thermal paste unevenly or incorrectly. Some have suggested that if this concerns you, then maybe reseating the cooler could help, but we can’t necessarily guarantee that this will even things out.

What Is An Ideal Temperature?

As for “ideal” temperatures, like we said, the max temperature your CPUs should run when under the maximum load should be 15-20C lower than the TJ. Max value, but at the end of the day, the ideal temperature will vary from PC to PC. Laptops, for example, are notoriously bad at cooling compared to desktop builds, so it would be expected and normal for a laptop to run hotter than a PC.

Also, between PCs, it varies because some PCs might use cheaper cooling components, while others might opt for more expensive liquid cooling systems that would obviously perform a lot better.

How To Keep Your PC Cool

If you’re trying to have your PC run as optimized as possible and under the minimum amount of load, try reducing the number of applications you have running in the background. For example, if you’re playing a game, it might be a good idea to close unnecessary background apps like browsers, video players, and so on. Of course, if you have an extremely powerful rig then this might not apply to you, but for those with regular PCs, it’s not a bad idea to reduce the amount of background processes to reduce the load.

Over time, dust gathers and can build around the components of our PCs that will cause it to get hotter. Opening up your case and carefully vacuuming out the dust around the fans and other components can go a long way in preserving your PC and helping it run as cool as possible.

As we mentioned earlier, one of the reasons why some temperature readings show one core running hotter than the other is due to incorrect application of thermal paste. However, at the same time, if you have been using your PC for years, it might not be a bad idea to replace the thermal paste which would probably have dried up already.

Get A New Cooler

The default CPU cooler than your computer came with is good enough to get the job done, but it’s not necessarily the best. If you find your PC is running too hot, or hotter than you’d like, it might be time for an upgrade. There are plenty of third-party CPU coolers that do a much better job at keeping your CPU cool.

Filed in . Read more about Apps. 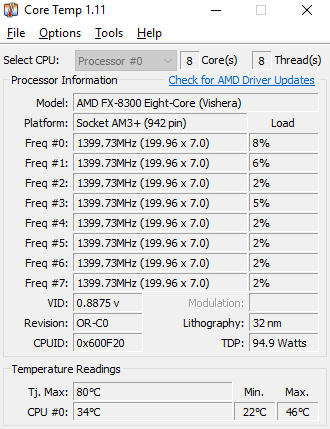