Yet what Pope Saint Pius X describes in Pascendi Dominici Gregis in paragraph seven is the doctrine of immanence, which contains the rejection of the proofs for God's existence and natural theology; the explanation for these things 'must, therefore, be looked for in man.' 35 While some say that the condemnation of immanentism is strictly with. Ripperger may be referring to a completely different issue coming from a bad theory of moral theology called proportionalism. However, he never clarifies that this is what he is referring to.

You are not signed in as a Premium user; we rely on Premium users to support our news reporting. Sign in or Sign up today!

It's easy for faithful Catholics to be turned off by the antics of priests and laypeople in many parishes across the country. With Protestant songs, guitars, hand-holding, inane homilies and lay people all over the sanctuary, it's obvious why Catholics might prefer the Traditional Latin Mass.

As pervasive as these liturgical abuses are, the number of parishes offering the usus antiquior is increasing. In 1988 Pope St. John Paul II established a commission to allow the Mass in the Old Rite, but few bishops took the opportunity. In fact, many fought against it or outright ignored it. Finally, in 2007 Pope Benedict XVI allowed priests to say the Traditional Latin Mass without permission from their bishops. Since then, it has spread from just one or two parishes in a given diocese — if at all — to several parishes in each diocese. In some parishes, people are able to attend the Mass daily.

But some people, scarred by their experience in 'modern' parishes, are an easy target for poachers. Who are these poachers? They are members or advocates of the Society of St. Pius X (SSPX), a breakaway group that's formed its own insular community. If you ask them, they'll say they are the ones who make up the true Catholic Church, while the post-conciliar Church (referring to the Second Vatican Council in 1965) gave up the Faith long ago.

They're a fringe group, and many people in your average parish haven't even heard of them. But in parishes where the Traditional Latin Mass is offered, they make their presence felt. In the diocese of Pittsburgh, the SSPX bought a closed Catholic church, refurnished it and re-opened it in March. None of this was done with the permission of the local bishop. Even though the SSPX has no canonical status in the Church, the Society calls its parish St. James Catholic Church.

But Pittsburgh already has a thriving and active Traditional Latin Mass community, which offers the same Mass the SSPX offers, but in a parish that's in communion with the Catholic Church and under the jurisdiction of the local ordinary. Pope St. John XXIII parish has a daily Traditional Latin Mass, with an average of about 400 people attending on Sundays.

But the pastor, Fr. James Dolan, has told ChurchMilitant.com that he is constantly having to safeguard his parishioners against attempts by the SSPX to poach souls from his parish. Several years ago there were allegations that Society supporters went so far as to get the names and addresses of those who attend the Latin Mass at his parish and have since been sending anonymous letters filled with rancor for the Holy Father, telling the faithful they have a safe haven within the local illicit SSPX chapel.

In other parishes there have been dust-ups between traditionalist churchgoers and the priest when the priest had to use Hosts from the Tabernacle consecrated at a previous Novus Ordo Mass. The SSPX maintains that even though the Traditional Latin Mass may be offered reverently, it is nonetheless promoted by the post-conciliar Roman Church — hence people shouldn't attend such diocesan-approved Masses.

As noted by an anonymous Catholic priest in the diocese of Madison, Wisconsin, who spoke with ChurchMilitant.com, sometimes people are likely to be pulled away into the SSPX simply because their family is involved. Others want to stay with the Society because they fear the bishop, Robert Morlino, who is admittedly well disposed towards Tradition, could one day be moved to another diocese and replaced with a less orthodox prelate. 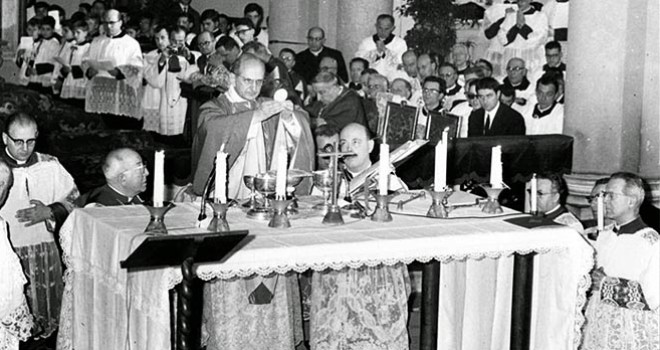 Another source confirmed that the SSPX lured as many as 80 of the faithful away from a diocesan-approved Latin Mass community. The problem is increasing to the point where several bishops in the United States, Italy, Poland and Ukraine have had to warn the members of their diocese of the Society's status: that the Society is in a state of separation from the Roman Catholic Church. Often, the diocesan Latin Masses lose not only people to the SSPX, but also important financial support.

Even within the diocesan-approved Latin Mass communities, people are tempted to go to the SSPX because of sometimes overbearing bureaucracy and poor management on the part of the diocese. Sometimes the priest appointed to say the Old Mass has little or no love for anything Catholic before the Second Vatican Council.

But that's becoming less and less the case. Many young priests are learning the Old Mass and are incorporating its elements into the Novus Ordo Masses they say at their parishes. There are even several bishops who themselves say the usus antiquior and promote it among their priests, like Bp. Morlino of Madison.

It's an indisputable fact confirmed to us by multiple sources that the SSPX has a habit of setting up shop in a diocese — without the permission of the local bishop — and then poaching the faithful away from diocesan-approved Traditional Latin Mass communities, taking souls away along with their financial support. Such acts can only cause antagonism and ambivalence, hardly endearing them to the local bishop. Such actions can only hinder any authentic reunification with Rome.