Ethan Uslan (pronounced 'Yoo-slin') is one of the hottest names on the ragtime/traditional jazz scene today. The first place winner of the 2007 World Championship Old-Time Piano Playing Contest (Peoria, IL), Uslan has performed on NPR's A Prairie Home Companion as well as various concerts and festivals nationwide.

‎The Carolina Shout is a podcast about ragtime, New Orleans jazz, Harlem stride piano, and swing. Ethan Uslan is the pianist and host who performs live from his living room and offers up fun commentary and stories about the music. Each episode is a short informal private concert just for you, with oc.

Uslan studied classical piano as a child in South Orange, N.J. and later majored in classical piano performance at Indiana University. All the while, Uslan secretly harbored a ragtime addiction, and complimented his classical piano studies by learning to play like Fats Waller, Jelly Roll Morton, and George Gershwin. 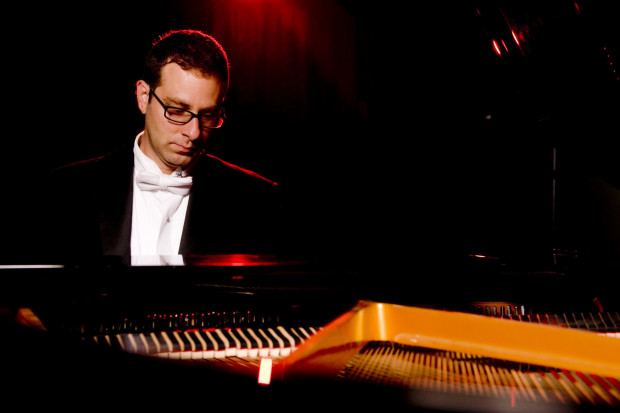 After college, Uslan found his way to Charlotte, North Carolina, where he has enjoyed playing all over town, including with the Charlotte Symphony.

In addition to giving concerts and accompanying silent movie screenings, Ethan has served as adjunct visiting lecturer of music at the University of North Carolina-Charlotte. He has recorded three CDs as well several silent film scores on DVD.

He is also being featured in the upcoming ragtime documentary The Entertainers. When not playing piano, Ethan and his wife, Kate, chase after their two little sons.

You can order tickets for this concert over the internet by using your credit card and the PayPal service.

Online ticket sales for this event are closed.

Ethan Uslan is a ragtime/jazz/silent film pianist based in Charlotte, North Carolina. He is a 3-time winner of the World Championship Old-Time Piano Playing Contest (yes – that really exists!) and has performed all over the USA, Europe, and Cyberspace, where his jazzed- up Für Elise has gone viral. Aside from solo work, Ethan has appeared with symphony orchestras, jazz bands, improv comedy groups, and even a clown show.

When Ethan was 9, the Uslan family acquired a piano. After Ethan’s mom taught him the only song she knew (“Heart and Soul”), she handed him over to classical pianist Faina Litenzon, who taught him scales, how to read music, and the importance of playing with feeling. She also taught Ethan the importance of patience and disciplined practice – traits that were completely lacking in him when he first set foot in her door.

As a teenager, Ethan wanted to try some new musical genres to supplement his classical music. He took some guitar lessons but gave up because he didn’t like having to tune it. So he found Dan Crisci, a fine jazz pianist, who taught him the fundamentals of jazz improvisation and theory. Unfortunately, it turned out that just like classical music, jazz required patience, discipline, and scales, scales, scales. But Ethan practiced diligently.

Ethan went on to study classical piano and musicology at Indiana University. His classical piano professor, Edmund Battersby, put him through the ringer, assigning him diabolical etudes that put his fingers in knots. Ethan is proud to have learned certain Chopin etudes that he had previously avoided. Meanwhile, in the classroom, Ethan had the opportunity to study the history of American popular music with Jeffrey Magee, who wrote the authoritative biography of Irving Berlin.

At some point in Ethan’s college career, he started to get obsessed with American popular music from the ragtime era through the 1940s. Why? Well, that stuff has a toe-tapping pulse, it’s unpretentious, and it’s charmingly American. All those sonatas by Beethoven and the European masters can make a New Jersey boy homesick (musically speaking). Ethan never had a teacher that specialized in ragtime piano playing. Fortunately, the other teachers in his life had given him all the tools he needed to figure it out himself.

For more information about Ethan Uslan, visit his website at www.uslanmusic.com