Cleopatra from Civilization 6, leader of Egypt's civilization. (c) 2k Games/Firaxis A new page on the Civilization website and a new video on YouTube has the basic gameplay details for longtime Civ standby Egypt, led by Cleopatra in the upcoming Civilization 6. Come join our discord: Twitter: https://ww. There is no doubt that Cleopatra, queen of ancient Egypt, is one of history’s better-known figures. She’s known as a seductress due to her relationships with the Roman leaders Julius Caesar and Mark Anthony, and the latest preview video for the upcoming strategy game Civilization VI reminds us how her love affairs changed the course of history forever.

Cleopatra is the leader for Egypt in Civilization VI.

The Egyptians are led by Cleopatra VII, a woman who, in her short 40 years of life, managed to wed two of her brothers and have affairs with two of the most powerful men in Rome.

Born Cleopatra Thea Philopater in 69 BC, the Egyptian ruler set forth on a path to power that left many lives in her wake. At the age of 14, after many of her rivals had been poisoned or executed, she was made regent and deputy to her father, Ptolemy XII. Four years later, her father passed away, leaving Cleopatra and her brother Ptolemy XIII (who was only ten years old at the time) as joint rulers of Egypt. Cleopatra, now married to her younger brother, had no intention of sharing power, and eventually had all mention of her brother erased from public records. Ptolemy XIII fled and she had become the sole leader and pharaoh of Egypt.

In the years to follow, Cleopatra would strike up romances with powerful Roman figures such as Julius Caesar and Mark Antony, and ally Ancient Egypt with some of the most important figures of the time.

There will be those who underestimate you, but you are cunning and full of tricks, Queen Cleopatra. Your charm will establish indestructible alliances with the strongest leaders of the world. Keep your friends close by your side and you will find yourself untouchable, with the glory of Egypt primed to win over the world.

Darwinist - Believes in constant struggle and likes to see civilizations at war. 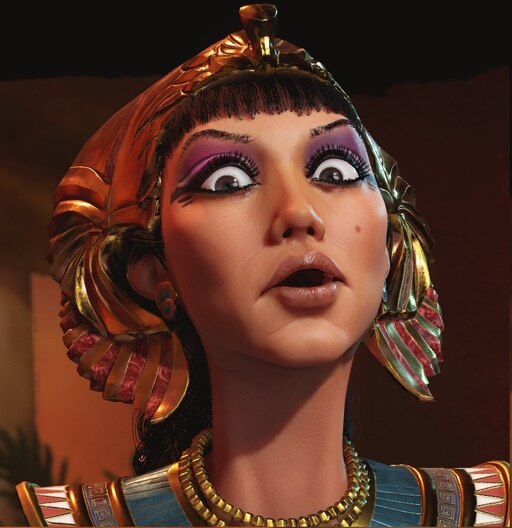