This map was created by a user. Learn how to create your own. Missing the “Earth” maps from previous Civilization titles? This is the closest thing.

Fortunately, heroes don't always wear capes. Civ Fanatics modder Gedemon has come to the rescue with an Earth map for Civilization 6 that you can download and play now.

But - hold your horses - there's something you should know before you do. It's massive. It's bloody massive. It even has its own bespoke Ludicrous map size (230x115) that can host more than 50 cilivizations! And being so bloody massive means it may make a mess of your computer.

'Warning: The Giant map is already way above the size of the huge map, it may or may not load on your PC (and will take some time to do so). The Ludicrous map is the max map size before the game refuse to load, and will take more than 4-5 minutes to load (or crash). I'd suggest lowering the texture size in the video option - the game used almost all the 6GB of VRAM of my GPU,' Gedemon wrote. 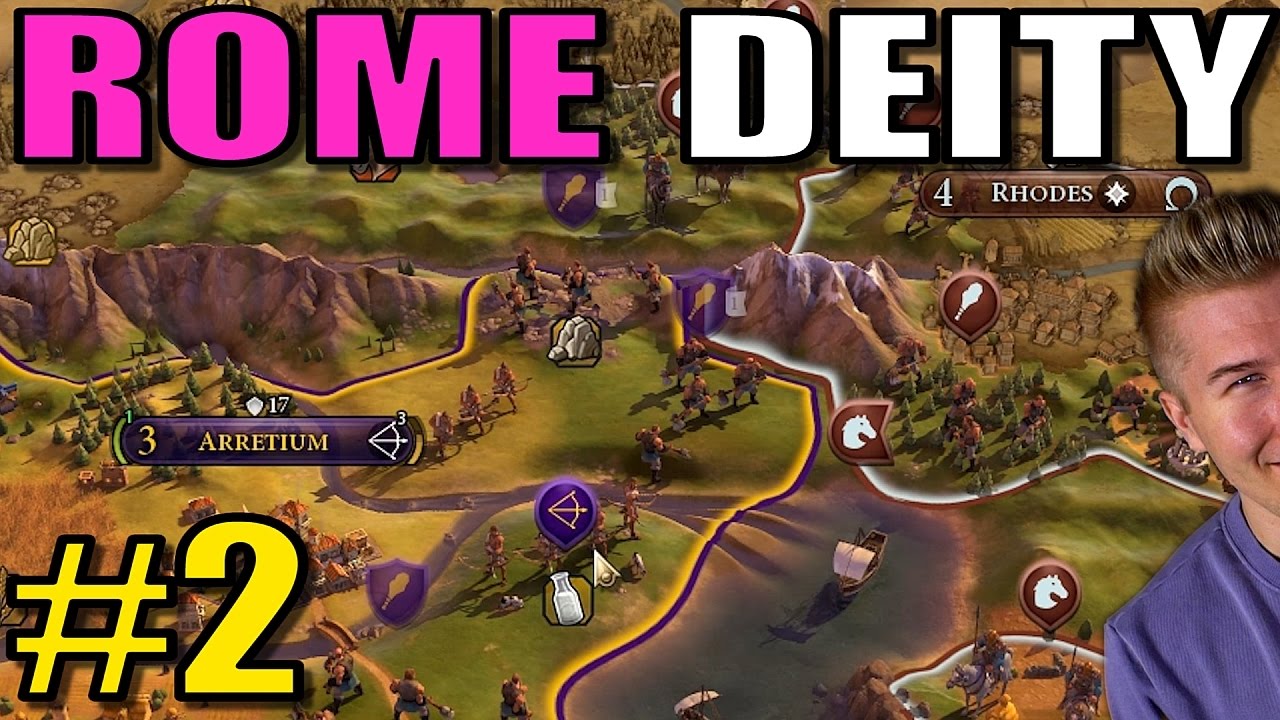 The 'YnAMP - Yet (not) Another Maps Pack' is still in alpha state and needs testing, but has successfully run for 500 turns with 32 civilizations on Gedemon's meaty machine (i7 4770K CPU, 16GB RAM, GTX 980 ti GPU). 'But I have no idea of the minimal configuration for this.'

We published our Civilization 6 review yesterday. 'Civ 6 harnesses the series' great strengths and adds wonderful new features of its own in an accessible and compelling entry,' Stace Harman wrote.

We also shared a bunch of Civilization 6 tips, tricks and guides you may find helpful.

Last but not least, we met Sid Meier! Well, I say we - an excited Chris Bratt talked to Sid Meier about 25 years of Civilization last week. 25 years! Goodness gracious me.

What, you thought I was going to relaunch my blog with a simple introductory post, and then not talk give you actual content? Silly you. I recently downloaded the newest DLC for this fantastic game. It included a TSL map just for South Asia. For the uninitiated, TSL stands for True Start Location. In this map type you are spawned on an approximated map of the world, and your starting location is where your Civ started historically. Currently this map can only hold 6 of the many Civilizations in the game. I started with the one of the two newest Civ’s, Indonesia.

Indonesia is led by Gitarja. She is a naval focused Civ, and those are my favorites. I love exploring the world with boats and deterring land invasion with a superior navy. Her unique improvement is the Kampung. It is a unique improvement you can put on water tiles adjacent to coasts. It gives you extra benefits if built around fishing boats. As Indonesia is all about the ocean, it makes sense for them to make use of otherwise desolate tiles. This is especially helpful as she starts on the fractured lands of polynesia. Most Civs would struggle in such circumstances, not Giraja. As an added benefit you get to listen to Sean Bean (of Game of Thrones and much more) accurately nail down the intricate pronunciation.

So I began my journey. I had an idea of who I might find on the map, but it took me several centuries to find another player. It was none other than the other newest Civ, the Khmer. Led by Jayavarman IV, the Khmer are a cultural and religious powerhouse. As expected they pushed for a religion and ended up with Islam, as I snagged Hinduism first. They wasted no time in converting their part of the world to Islam, and that appears to be their main victory condition now. That and making me want to listen to the King and I sound track.

All that’s missing is Yul Brynner.

The next Civ is one of my favorites in the entire game, Hojo Tokimune of Japan. Japan is an excellent cultural Civ, and excels at making use of small spaces. The South Asia map gives them much more space than the normal TSL map, which allowed them to expand quite a bit. They grabbed Shintoism which is pretty natural for Japan. They expanded West to the main continent, which has put them in direct competition with China. As historically accurate, Hojo has been in many wars with China thus far. As of my last save the game just hit 1600 and the two nations have been to war 4 times. I guess they truly can’t get along.

Poor Hojo can’t catch a break though. He is at the middle of the pack victory wise. Not able to edge out the other Civ’s.

That takes us to Qin Shi Huang, the leader of China. China loves building Great Wonders of the World and is a specialist in winning Culturally. They are doing so handily in the game thus far. Taking the lead in both culture, and pulling far ahead of the pack Scientifically. I came to blows with him early as he is the pre-eminent leader of the game, and I enjoy playing a slow cultural game. He has been able to handle his multiple wars with Hojo well, using his Hidden Dragon Cannon’s to great effect. He also recently started constructing the Great Wall, which will no doubt just anger Japan more. China grabbed Confucianism, but hasn’t been able to expand it. In part because of Yul Brynner’s excellent religious expansion.

He’s pretty proud of all his pretty buildings. Also none to happy about me building the Great Lighthouse. China has no water borders, so has no chance to build it, but was still mad I had a pretty building.

Next I met the Nuclear Warmonger himself, Gandhi. Gandhi grabbed a religion unusually late for India. Forcing him to settle with Protestantism. He hasn’t done a ton to impact the game. The Indian subcontinent is sheltered off from most of the map, and hasn’t impacted the game as much as the other 4. He has spent most of his time fighting Barbarians and shaking his stick at anytime another Civ goes to war. He also just got engaged in a nasty war with Scythia. Fortunately this means that Gandhi should be pretty tame by the time the Atomic Age comes about. As a reference to a glitch from the first game, Gandhi will always go for nukes when they are unlocked. It’s a fun homage, that can be devastating.

He may look peaceful, but in a few centuries he’ll bomb the shit out of you.

The final player in this game is Tomyris of Scythia. The nomadic warrior is in the far right corner of the map, and would have to get past India and China to get sea access. They have yet to do so. While normally a very aggressive early game Civ, she spent much of the early game contending with the same Barbarians that India was fighting. As soon as they were snuffed out, she turned her eyes to Gandhi. Saddly, this wasn’t until 1540, well past her prime for conquest. She grabbed Zorastrianism, but has struggled to convert her own cities, let alone other empires. She has had the poorest start in the game so far, which is a shame. Land based Civ’s appear to have a harder time on this map type. Unless they like to spam pretty buildings.

Those are the players and some of the details of the game so far. But here is the best recap. I have played a peaceful game, but quickly built up the worlds strongest navy. After establishing an alliance with the Khmer, Scythia, and Japan, I set my trap. I initiated a massive coalition war against China, in hopes of setting them back. Tomyris was of little help, being sheltered away from the conflict. The Khmer never mobilized forces, but China did send troops that were quickly defeated. Japan, being immediate neighbors had the biggest impact. They were quickly invaded, in what was the fourth conflict between the two nations. Despite being technologically inferior, they were handling themselves well. Meanwhile I mobilized my massive navy and invaded the Independent state of Hong Kong. Despite being a City State, they were allied with China and providing them a large industrial boost. They fell quickly, and I was able to establish a foothold in Chinese territory. A little further away in the Korean peninsula, Seoul was hounding Japanese forces. Another independent state allied with China, they were helping China lead the Science race. They fell in an equal amount of time, giving me another striking point into China. Afterwords, I sent my boats to bombard the coast Japan, successfully killing off the Chinese troops. After this China gained peace from the coalition and wasn’t forced to capitulate any territory.

This is where I was forced to save and start my normal day as a mild mannered citizen. When I reload I will attempt to steal away a cultural victory from China and Japan. I have a foothold in China, and have just discovered gunpowder and ballistics. With my muskets and cannons I should be able to take advantage of China’s weakened military. Other than that, who knows what fun thing lie in store for me and Indonesia in the next installment.

I hope you enjoyed, and stay tuned for more content.