When I said I felt “done” with Civ6 in the last post, I kinda felt bad about that, so I created a new game — this time I went with Korea, as I’d seen somewhere that that civ is “overpowered.” I did an Island Plates map and ended up with Pericles as a close neighbor that I immediately attacked his capital and took over in the Ancient Era, then finished exploring the island we shared and began settling it out.

And I have to agree — Korea is overpowered. I was playing on Epic speed, so 750 turns instead of 500, but everything I did seemed to take the same number of turns as in a normal speed game, and tech came insanely fast due to their unique campus district. So fast that I had actually completed the tech tree in 325-ish turns — not even halfway through the game turn-wise and I had the full tech tree. 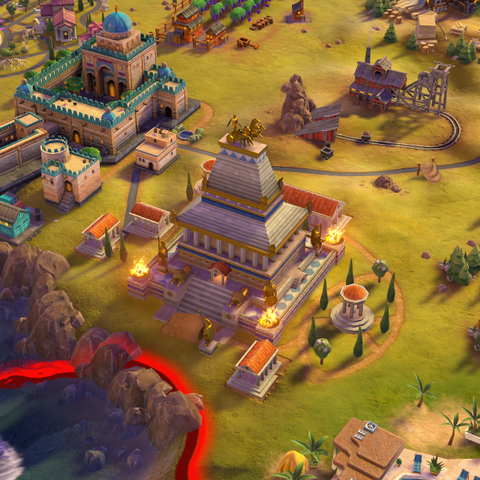 Oct 16, 2020 October 16, 2020. One of the most realistic features of Civ 6 is loyalty. Just as in real life, entire civilizations can rise and fall based on the loyalty of the population. Unfortunately, loyalty can be just as tricky in the world of gaming as it is in your own world.

Yeah. THAT overpowered. Perhaps unsurprisingly, I did a science victory for that game.

The era score was still completely opaque to me, but I managed to be “normal age” for the 1st era change, and then “golden age” for the rest of the game, I assume due to all my fast advancement in science.

After that game, I decided to go to an old favorite with Indonesia, this time on an Archipelago map. I hoped for Auckland as a city-state, but I hoped in vain. On the other hand, Nan Madol was in there, which also synergizes nicely with Indonesia wanting to build everything in coastal tiles, so I ended up having culture coming out of my ears in spite of never building any culture districts.

This game was more of a see-saw on the dark vs golden ages. Moving from a dark age to a golden age actually makes it “heroic” so you get to choose 3 of 4 dedications, which can be nice, but when you’re in a golden age, a dedication doesn’t give era score (unlike in a dark or normal age) so that’s why it’s so easy to fall back out of golden — even right back to dark. I got to the point where I’d “only” see saw from golden to normal and back to golden, but it’s still an obvious design decision on the dev’s part that seems to punish you for getting a golden age, in spite of the (very small to the point of being unnoticeable) bonuses you get while in a golden age.

We’d gotten into the Medieval Era and I had some Jung units that I’d bought with faith (go go Indonesia cultural powers!) and I’d gotten a great admiral that had turned one into a full armada. I’d just unlocked fleets, so I had a 2nd unit in a fleet and both these guys were out exploring, along with the caravels that I’d upgraded from my initial galleys. I was suzerain of Armagh, a faith city-state, and was getting some really nice bonus faith from them each turn, so when Kongo declared war on them and my ships all happened to be within a turn or 2 of being able to move on Kongo… I declared a protectorate war.

Konga didn’t even have walls on most of his cities, so my Jung armada was 1-shotting their health to nothing, then a caravel could come in and take the city. Since they were halfway around the world, I knew with the loyalty mechanic I’d never be able to hold the cities, so I just razed them instead. I just did this to “outer fringe” cities, but this knocked him from 6 back to his 3 core cities. These 3 did have walls, and I knocked one set out, then he sued for peace. I accepted. And then next turn he sent enough envoys to Armagh the he became suzerain, so of course he wasn’t going to attack it anymore.

I actually didn’t care. Suzerain of Armagh can build a monastery improvement, is all — I only cared that I had 6 envoys there for all the faith that that gave me in my shrines and temples each turn that I could use to buy more naval units.

A bit later, my 2 nearest neighbors — Pericles and Amanti… um… Nubia… declared a joint war on my. Pericles was slightly closer, so I decided to go after him 1st, since Nubia didn’t even have any ships that I could see — plus all my cities had walls and bombards in them by then, so I wasn’t worried about needing sea units to defend them.

Since I forgot about loyalty for a bit, instead of going for Greece’s closest city, I went around to the far side of his island and took Athens, figuring that losing his capital would weaken him more overall, but since it was in the middle of his empire, the loyalty from all the surrounding Greek citizens meant that there was no way could I hold it. It said that I had 5 turns before losing it, so I tried to send the 3-turn military governor and get its monument repaired, plus immediately went back and took the city between Athens and my borders. This slowed the loss to 7 turns, but it still turned independent on me.

From this I learned that if you’re doing a war across water, to have any hope of hanging on to your gains, you must steamroll the opposition to reduce their loyalty pressure. No “take this city and consolidate my gain, then advance” anymore. Nope, it’s “take them all as fast as possible so their loyalty becomes yours.” So I swept through and took everything Greece had, then went back and re-took the independent Athens as well.

That meant I’d just added 6 new cities. And I was still at war with Nubia, who was a little farther away. I decided “sure, why not?” and went after that civ also. Now that I knew I had to steamroll, I made sure I had units in place and ready to go, then swept through her landmass also. She had built the Statue of Liberty wonder in one of her central cities, so taking that actually made the war a lot easier as that wonder makes all cities within 6 tiles of it 100% loyal to you at all times, so the loyalty pressure on the cities that I’d taken, but before fully mopping her up suddenly became a non-issue.

About at this point Kongo and Egypt declared a joint war on my, since they now hated me for my warmongering. So they got the same treatment. Egypt was closer, so she got sewn up 1st, then that took me close enough to Kongo to be able to maintain loyalty pressure there, so I could now take and hold cities on his landmass.

After this, Norway, who’d been my friend the whole game now hated me, though since I now controlled about 90% of the world, he knew better than to attack me, at least. But since it’d been a long game, I assembled my fleets at his capital, then declared war and took it and got my 1st Domination victory.

I’ve not completed any other games since then. I’ve started a couple as the Dutch, but haven’t gone past about 200 turns yet. The games are saved, so I’ll get there sooner or later.

Overall, I think I prefer not having the loyalty mechanic, nor the ages, so I guess that means I still prefer “vanilla” Civ6 to the Rise and Fall expansion. The new mechanics just force you to play a certain way, rather than let you make your own choices.

For what it’s worth, the Rock Paper Shotgun review of the game has noticed this same feeling in the game now, so I know I’m not alone in it. From that review: “Everything from the tech boosts that work like mini buffs and achievements to the focus on using the unique qualities of your chosen nation encourages a correct way of playing. There is so much feedback and positive reinforcement for ‘good’ choices that without even realizing it, I’m sometimes locked into a specific way of playing that’s defined more by the map and the city states around me than it is by my own choices.”

So anyway… I won’t say I’m feeling buyer’s remorse anymore, but I’m still not really seeing the expansion as an improvement on the original game either.

Happy gaming out there!

As W.E.B. Du Bois wrote in his autobiography, The Autobiography of W.E.B. Du Bois: A Soliloquy on Viewing My Life From the Last Decade of Its First Century, he was unable to imagine the same sense of hope he assumed some immigrant arrivals had felt when he sailed past the Statue on a return trip from Europe. This hope did not pertain to his race. The fight for equality, liberty, and justice for all at this point in time had not been achieved, but rather disregarded after the Statue's completion and dedication. Therefore, African Americans rarely used the Statue as a relevant symbol for their struggle - they were reluctant to embrace the symbol of a nation which would not fully include them as citizens. The Statue of Liberty did not help them to gain equality and justice in the truest sense - it was only the beginning.