Cardinal Koch's criticism is that only the SSPX does not accept ecumenical dialogue, relations with the Jews and religious liberty. It is somewhat disingenuous, since he knows people outside the SSPX are reluctant to publicly endorse these positions out of fear of persecution. 2-20-2013 UPDATED: read the full version at AP BLOG. Cardinal Burke owes the SSPX an apology for his unjust remarks and calumny. Let us pray Our Lord opens his eyes and gives him the courage to do just that:+). Cardinal Burke: Society of St Pius X “in Schism” “The Society of St. Pius X (SSPX) is in schism since the late Archbishop Marcel Lefebvre ordained four bishops without the mandate of the Roman Pontiff”, Cardinal Raymond Burke said in July at the Sacred Liturgy Conference in Medford, Oregon. The Catechism of the Catholic Church: 1376: The Council of Trent summarizes the Catholic faith by declaring: “Because Christ our Redeemer said that it was truly his body that he was offering under the species of bread, it has always been the conviction of the Church of God, and this holy Council now declares again, that by the consecration of the bread and wine there takes place a change of.

HumbleMaiden
I interpret Vatican Council II without assuming hypothetical cases are objective exceptions to the dogma extra ecclesiam nulla salus(EENS).They do the opposite.Do you think they are in schism, or at least heresy?
I affirm Vatican Council II ( Feeneyite-LG 16 refers to an invisible case) they affirm Vatican Council II ( Cushingite-LG 16 refers to a visible person saved outside the Church and so is an exception to Feeneyite EENS).So for them VC 2 is a rupture with Tradition and they reject it. I do not .Do you think they are in heresy?
I interpret the Nicene Creed to mean 'I believe in one baptism for the forgiveness of sins, it is the baptism of water' for them it is 'I believe in three or more known baptisms for the forgiveness of sins, desire, blood and invincible ignorance and they all exclude the baptism of water in the Catholic Church'.Do you think they are in first class heresy for changing the meaning of the Creed?
For me they are affirming heresy- but then so in Cardinal Burke and the two popes.
It is to the disadvantage of the SSPX and the advantage of the liberals and the Left.
The SSPX needs to affirm Vatican Council II ( Feeneyite) and demand canonical status.
If Cardinal Burke and the two popes do not affirm a rational theology and Tradition along with Vatican Council II( Feeneyite) the SSPX should - only then get a Canon Lawyer.

Here are some excerpts from this enlightening interview:

We grew up with that Mass—of St. Pius V—we loved it, we loved to serve the Mass, it inspired very much our vocations, why now should we not continue to appreciate deeply and love that rite…

What Pope Benedict XVI has said repeatedly is so true: that the beauty, the goodness of the rite, has to be as appreciated by us today as it has been in the past, right going back practically to the time of Pope Gregory the Great. And in that way, it will enrich the worship, perfect the worship of the whole Church…

I suppose that the principle of the result of the abuse was a too anthropocentric idea of the sacred liturgy, as if it were something that we had invented and therefore with which we could experiment instead of being a gift given by Our Lord to the Church which we must prized and treasure and safeguard. We need to recover that sense that this is the action of Christ; that it’s Christ Who is the protagonist for instance in the celebration of Holy Mass, not me as a person, but the priest in his personality, but Christ Himself. It is my great hope that the… [reform of the Mass] will underline the transcendent nature of the sacred liturgy as Pope Benedict often says: “the meeting of Heaven and Earth”.

There is little doubt as to the religious faith and sincerity of his discourse as Cardinal Burke is perhaps more able to speak his mind, far away from the peer pressure of American lobbies. He shows himself the servant of the pope, but this is not to say that he is a servile Roman subject as he already initiated the “traditionalization” of his diocese in the 1990’s. It is wonderful to see the confession of the humanistic bent inherent to the new rite.

This being said, a few items are worth our observation here. His diplomatic answers about the use of “for many” as the still official text, and of the discontinuing of “Communion in the hand” in Rome, suggest that the new liturgical movement of Benedict XVI is determined to act more by suggestion than by governmental legislation. [See below for some recent examples attempting to stem the abuse] 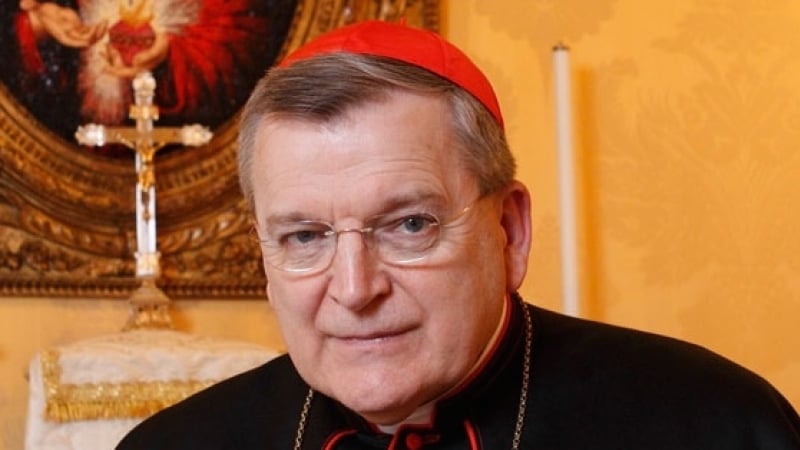 What is still for us difficult to understand, and remains unsolved by the Cardinal, is his wish to reconcile the two rituals of the Mass. For this, he is advocating for the papal “Reform of the Reform”, and for the rejection of the “hermeneutic of [ritual] discontinuity” between the Novus Ordo and the Tridentine Mass.

How interesting it is to see that a man who understands the “anthropocentric” core of the new liturgy, in flagrant opposition to the awe inspiring old rite, still believes in the peaceful the cohabitation of such incompatible partners?