There are new threats every day on the web and they often prefer to attack via your web browser. With Malwarebytes Anti-Exploit, you've got an extra piece of protection against these threats.

Anti-Exploit is a part of the Malwarebytes arsenal of tools and it can help protect against malware and viruses through your web browser. At the moment, it supports Mozilla Firefox, Google Chrome, Internet Explorer, Opera Web Browser, Tor Browser Bundle, Palemoon, Maxthon, Waterfox and Comodo Dragon.

When the program is running, it can be accessed from the system tray by click on its icon; this provides access to blocked threats and quarantined files. When a threat is detected, Anti-Exploit logs which can be accessed later from the 'Logs' tab.

In conclusion, Malwarebytes Anti-Exploit is certainly a useful application to have installed and does a nice job at protecting against known threats.

This download is licensed as freeware for the Windows (32-bit and 64-bit) operating system on a laptop or desktop PC from antivirus without restrictions. Malwarebytes Anti Exploit 1.13.1.345 is available to all software users as a free download for Windows. 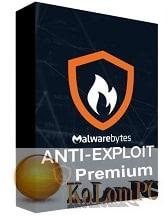