Nubia The Nubian people represent a civilization in Civilization VI. They are led by Amanitore, under whom their default colors are light yellow and brown. They are available with the Nubia Civilization & Scenario Pack, which was released on July 27, 2017. I discuss the Nubian Queen Amanitore! Images of Natakamani frequently include Amanitore. Amanitore was one of the last great builders of Kush - restoring the large temple of Amun at Meroe and the Amun temple at Napata after it was destroyed by the Romans, plus building additional temples to Amun at Amara and Naga.

In its many years, Civilization games have given us nations to defend, intellectual treasure to unlock and leaders to befriend (or betray). We’ve seen leaders of all kinds, including Gandhi (whose hilarious in-game propensity toward nuclear armament is well-documented), Ramkhamhaeng from Siam (one of my favorite cultural leaders) and Boudicca (if I want to kick some serious ass in military conquest).

We’ve also had several black leaders — Songhai’s Askia, Ethiopia’s Haile Selassie and Zulu’s Shaka in Civilization 5 and Mvemba a Nzinga in Civilization 6 — and a handful of brown leaders. But for the most part, they’ve been men. Cleopatra and Hatshepsut have rounded out the Egyptian representation, of course, but we hadn’t seen a sub-Saharan African black woman leading a nation in-game.

Civ 6 Nubia: Why Amanitore is such a big deal

Sid Meier’s Civilization series has long been a staple of 4X games — 4X refers to the strategic tenets of “eXplore, eXpand, eXploit and eXterminate” that are popular within this brand of strategy games. Sid Meier’s work in the early ’90s defined the 4X genre both in terms of mechanics and flavor.

The original Civ and its sequel relied heavily on text to communicate — it was the early ’90s and we made do with what we had. Players didn’t get an opportunity to see what the leaders might have looked like until their portraits were implemented in Civilization 3. And in those days, we might not have cared. 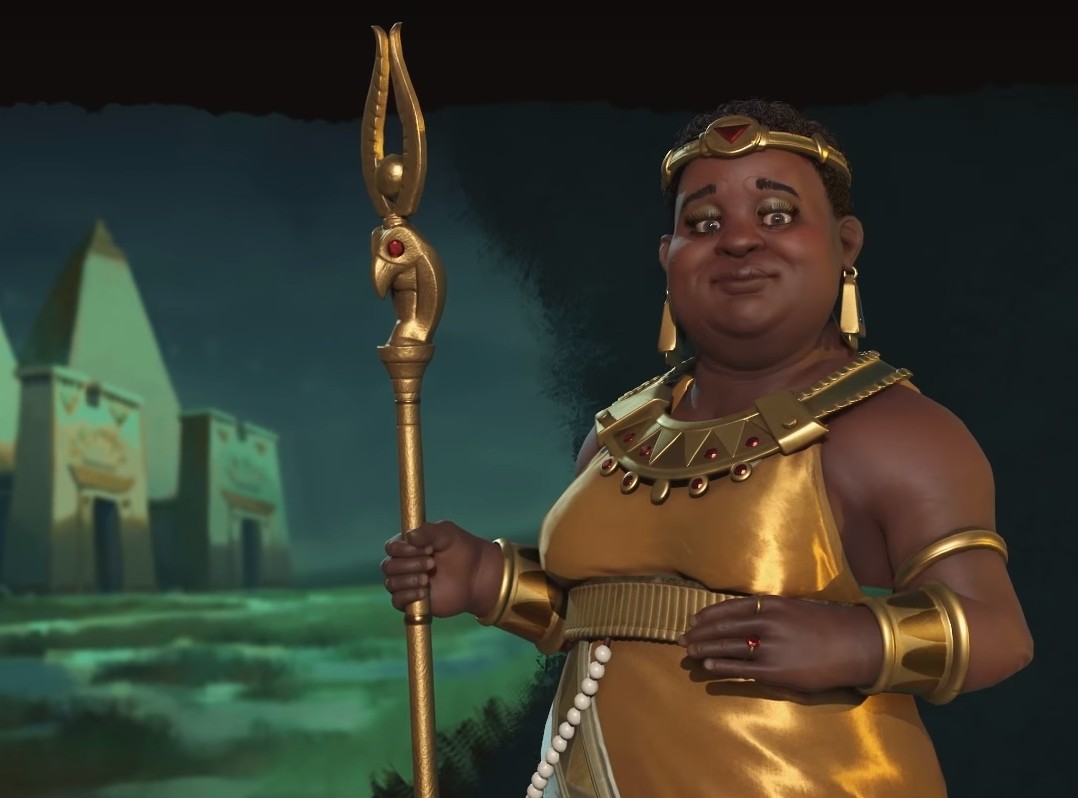 But, as we’ve come to learn, over the past 15 years especially, representation in games matters. Diversity is important. Being able to see ourselves in the characters that we’re temporarily inhabiting in a digital-scape means a hell of a lot to many gamers. 2K Games has been dedicated to bringing new and interesting leaders from a variety of backgrounds to the modern Civilization games, and it shows.

On July 26, Firaxis and 2K Games released a first look at the newest Civilization 6 leader to join the fray: Nubian queen Amanitore.

Black queens have been overlooked in the 25 years that Civilization has served as a mainstay of the strategy genre. We’ve seen a number of influential black leaders, but until Amanitore’s announcement, they’ve been men.

Of course, we’ve had the Egyptian queens, but that’s not exactly the same. Cleopatra’s origins have been traced back to ancient Greece. Civ 4’s Hatshepsut, who died in 1458 BC, is more of a mystery. There’s actually an ongoingdebate over her race, which makes it hard to pin down her racial heritage. (What’s more, Civ 4 came out in 2005.)

But there’s no denying that Amanitore is a powerful black female leader. 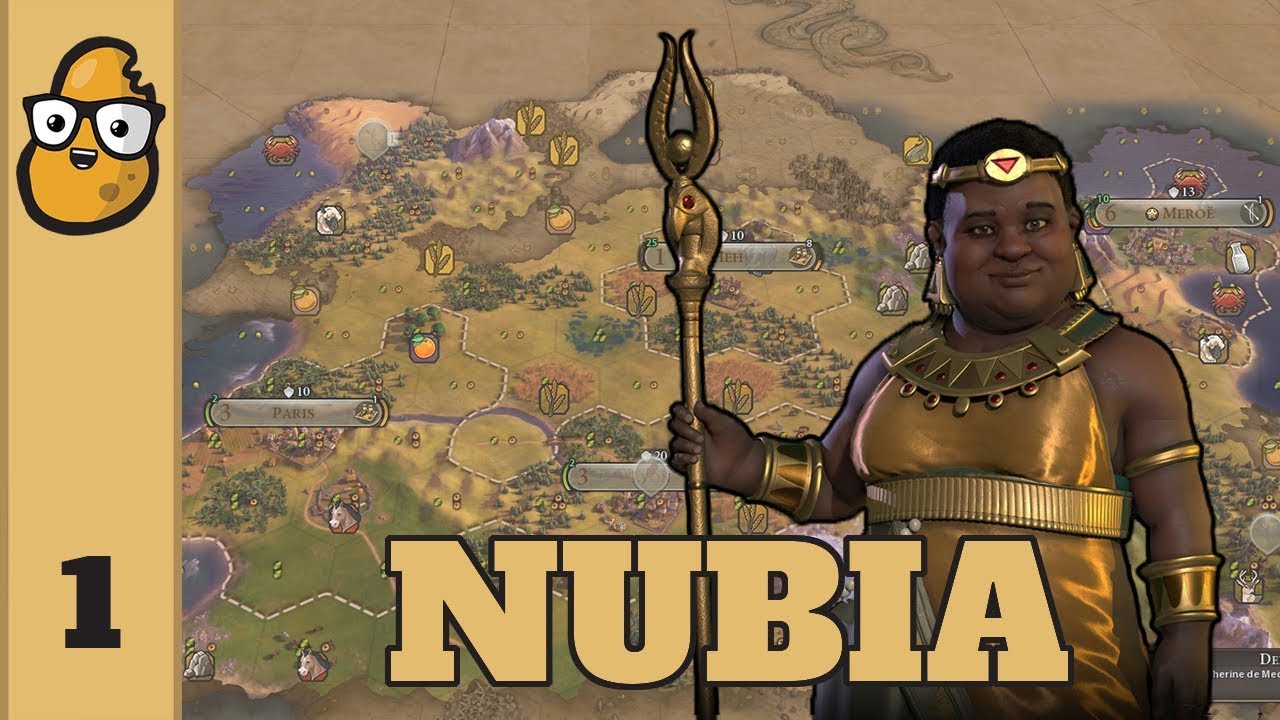 Unfounded criticisms of too many women in Civ 6 aside, I’m hopeful that we’ll see more women of color taking over the digital world-stage. I’d be interested in seeing a military-focused African queen — like Candace, Empress of Ethiopia. After all, Empress Candace halted Alexander the Great at her borders and refused to be cowed. I’m imagining a combination of Tomyris’ military-minded diplomacy and Gorgo’s dedication to tactics.

Fans of the game appear to be excited for what the Nubian queen may be able to accomplish when put to task. It will take time to see if Amanitore’s armies can stand against Montezuma’s aggression, but from what the video has shown (and fans have begun to analyze), she will be an economic and cultural powerhouse (as long as she’s settling in the desert or floodplains).

Now that we have Queen Amanitore (and I’m hoping for the Empress of Ethiopia next), we can finally see how powerful black women lead their nations with ingenuity, creativity, military might and compassion. And I am so excited to see who 2K and Firaxis will introduce us to in the next big Civilization patch.

Check out the latest from Mic, like this deep dive into the cultural origins of Gamergate. Also, be sure to read this essay about what it’s like to cosplay while black, a roundup of family-friendly games to play with your kids and our interview with Adi Shankar, producer of the animated Castlevania Netflix series.

These great powerful women of the ancient African continent continue to fascinate and intrigue. Whilst the world became obsessed with the findings and wonders of the pyramids and their contents the thousands of stories of the individual lives of these black people remain largely untaught,filtered and often biased.

Kandake was the royal title for queens and queen mothers of the ancient African Kingdom of Kush, which was an ancient Nubian state centred on the confluences of the Blue Nile, White Nile and the River Atbara in what is now the Republic of Sudan.

The Kingdom was a prosperous land ruled from the capital, Meroe. The Kandakes were also known as Nubian warrior queens, queen regents, and ruling queen mothers. They controlled what are now Ethiopia, Sudan, and parts of Egypt.

Kandake was a Meroitic term for the sister of the king of Kush who wouldbear the next heir according to the matrilineal succession. It was used as a royal title or dynastic name. It is sometimes translated into English as “Candace”. Some of the queens ruled in their own right; others ruled with their husbands, but these queens were not merely consorts, they usually had equal power with the king and sometimes more. The Kandakes had absolute authority, they ruled and were tasked with creating their sons as rulers. It was not unheard of for a Kandake to order a ruling king to commit suicide in order that he be replaced or even depose a son. Kandakes farmed, traded with Greeks and built pyramids; some were warriors who led their armies into battle.

The Most Famous of the Queens

She was the earliest known ruling African queen of ancient Nubia, She was a queen regent of the Kingdom of Kush, when the polity was centred at Meroe. She reigned from circa 170 to 150 BC. It is also stated that as queen she played a significant role in the Meroitic religion.

Even though her family antecedents remain obscure, in one of her carvings on a dorsal pillar she is shown adorned with an insignia of rank on the forehead and a crown, similar to the one worn by the reigning kings with decoration of a sun-disk and tall feathers. She appears in the works of art in some cases along with a smaller man. This man raises his arm from behind her to touch her crown.Some scientists have thought that the man standing behind her was crowned prince and was either her husband or her father, who died before reaching the throne.

Shanakdakhete’s name is engraved as a royal queen in the Egyptian Meroitic hieroglyphs, where they found the oldest hieroglyphic inscriptions. Her pyramid in Meroe is one of the largest pyramids built by the kings of Kush. The pyramid featuring a unique chapel contains two rooms and two columns. Landscapes in the chapel depicting military campaigns to the south show large numbers of livestock and prisoners. The queen’s landscapes appear in the form of a huge obese woman, (all Meroe queens had similar forms) which is a symbol not only aesthetically pleasing, but rather an expression of wealth and power.

In Meroe’s history, Amanirenas, one of the great queens’ royal palace was at Gebel Barkal.She ruled the areabetween the Nile and the Atbara rivers. Her husband was king “Tritkas” and she was his successor to the throne.

She is one of the most famous kandakes. The term Great Queen was attributed to the meaning of the royal title kandake because of her role in leading Kushite armies against the Romans in a five year long war between 27BC and 22BC. 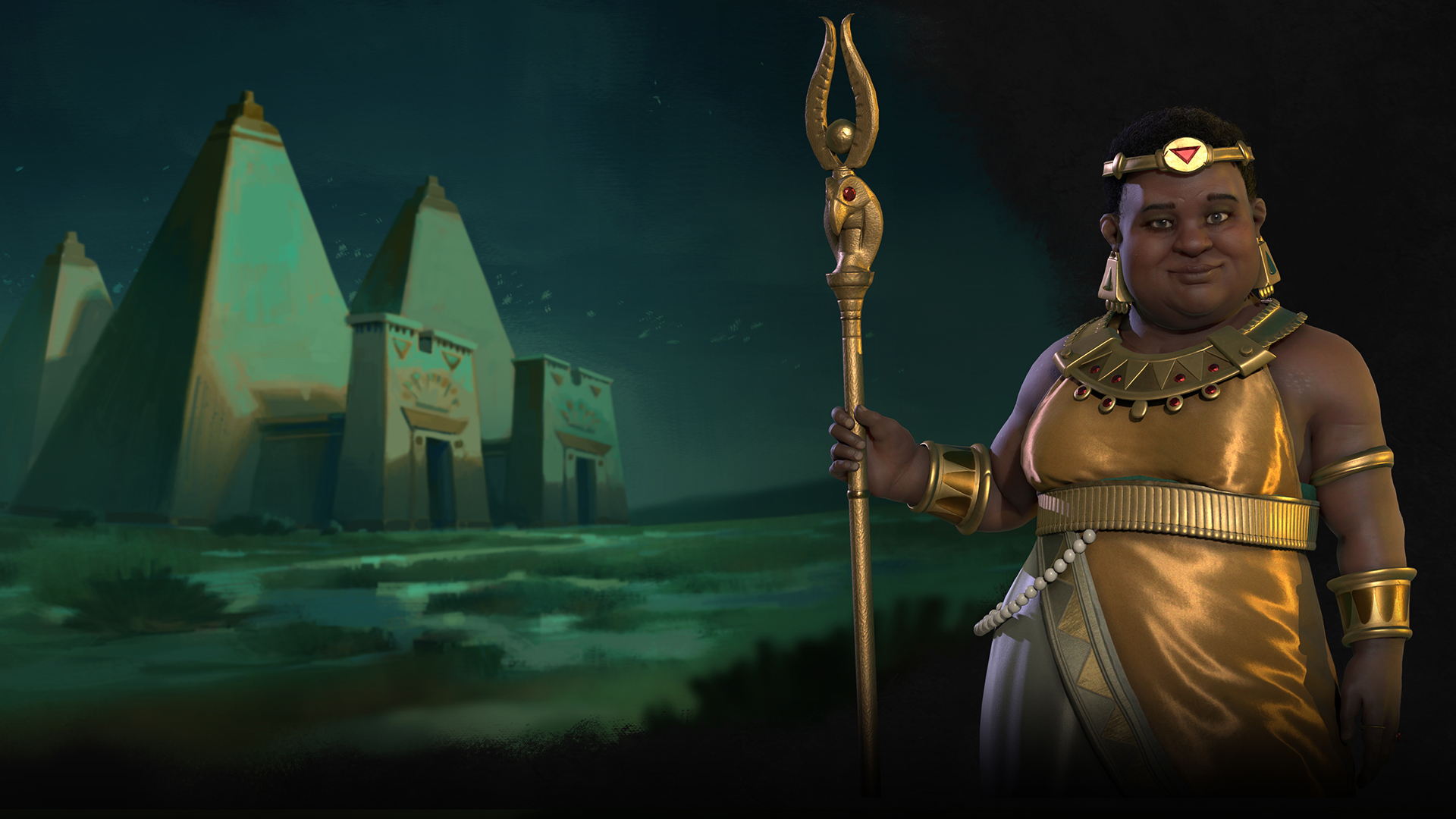 The Greek geographerStrabo wrote “the queen was very masculine and blind in one eye.” This description is consistent in terms of physical strength of Meroe’s queens that can be seen on the walls of their tombs and temples. Queen Amanirenas is buried at Gebel Barkal in Sudan.

Amanishakheto was the most powerful and wealthiest among the rulers of Meroe. There are several monuments of her and she is mentioned in the Amun Temple of Kawa.She built considerable pyramids and temples at “Wad Naqaa”, where she resided and where she was buried with great treasures. There are also inscriptions of a palace there. Inside Amanishakheto’s grave, the Italian treasure hunter Giuseppe Ferlini, known for raiding and vandalising several pyramids of Meroe, discovered a significant quantity of golden artefacts such as armlets, necklaces and some jewellery, which is now divided between the Egyptian Museum in Berlin and the Museum of Munich. She is often depicted on pyramid murals as a large, powerful woman, covered with jewels, elaborate fringed and tasseled robes, and carrying weapons in one hand, preparing to lead her army against the enemies of the North and South.

This Queen and Natakamani were the most famous couples in the history of Meroe although it has not been established whether they were husband and wife or whether she was his mother although she was often referred to as co-regent. They createdoutstanding buildings and her royal palace which was at Gebel Barkal in modern day Sudan is now a Unesco world heritage site.The Pyramid of Amanitore is in modern day Sudan.

We wish to thank In the City Sudan who provided much of the information and insight. Main photo Amanitore at Wad ban Naqa courtesy of Sven-Steffen Arndt